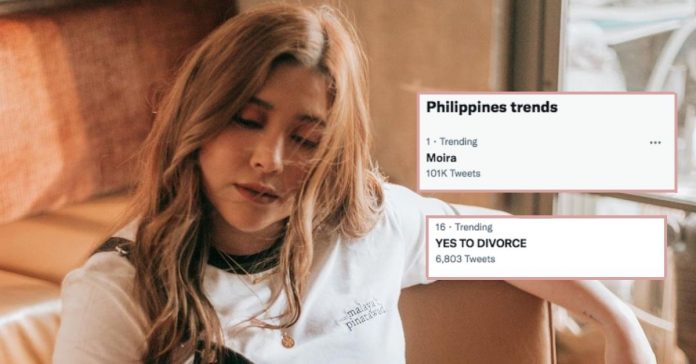 It seems netizens are nursing the same wounds as Moira Dela Torre and Jason Hernandez after they have ended their three-year marriage.

On Twitter, “Moira” and “yes to divorce” took over the social media platform’s top trending list for the Philippines at no. 1 and no. 16, respectively.

With over 100,000 tweets under “Moira” fans expressed their disbelief over the two singers’ controversial split.

“This Moira/Jason thing is probably triggering many people. Hugs to Moira, and hugs to all the people who now it feels to be her,” social media personality Inka Magnaye wrote.

A netizen’s viral tweet spoke about how Moira’s heartbreak songs were actually for her.

Others mentioned how the 28-year-old’s hit song “Paubaya” is now even more painful after what had happened.

“With what happened between Moira and Jason, here’s a reminder that cheating is not part of a relationship’s ups and downs. Never normalize cheating,” a Twitter user wrote.

Following Moira and Jason’s split, netizens discussed the reasons why they support the legalization of divorce.

There is no divorce law in the Philippines, but the dissolution of marriage can be obtained through the process of annulment.

On Tuesday night, Jason shocked fans when he released a statement informing the public that him and Moira had parted ways after he had been unfaithful to her.

“3 years, I married my bestfriend with the intent of spending the rest of my life with her. Though my love for her has always been genuine, a few months ago, I confessed to Moira that I have unfaithful during our marriage,” he wrote in a joint statement.