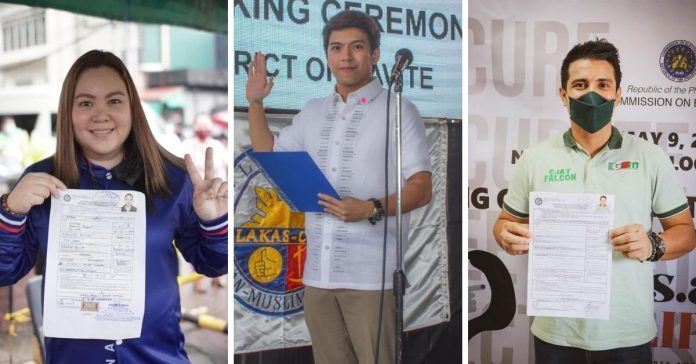 The month of October was kicked off with the certificate of candidacy filing for 2022 polls.

During the week-long filing, familiar faces were spotted submitting their certificates, making the switch from showbiz to politics.

Here are the television personalities vying for different local posts for next year’s elections:

On October 6, Lucy filed her COC for Ormoc city mayor.

Incumbent Ormoc mayor accompanied his wife as she submitted her COC. He has also filed as the 4th District Representative of Leyte.

The actor has officially filed his candidacy as vice governor of Oriental Mindoro.

Veteran singer and vice governor of Camarines Sur will be gunning for the the position of governor in next year’s election.

The dancer-actor is seeking reelection as a councilor in Makati city.

The actress will be running as a councilor under the local slate of talent manager Arnold Vegafria in Olongapo city.

Under the slate of Pasig mayor Vico Sotto, the actress will be running as a councilor in the city.

The actor has filed his COC for councilor in Quezon city.

The former child actor will be running for councilor in Cavite city.

The multi-awarded actor and civic leader filed his certificate of candidacy for congressman of the first district of Quezon City on October 8.