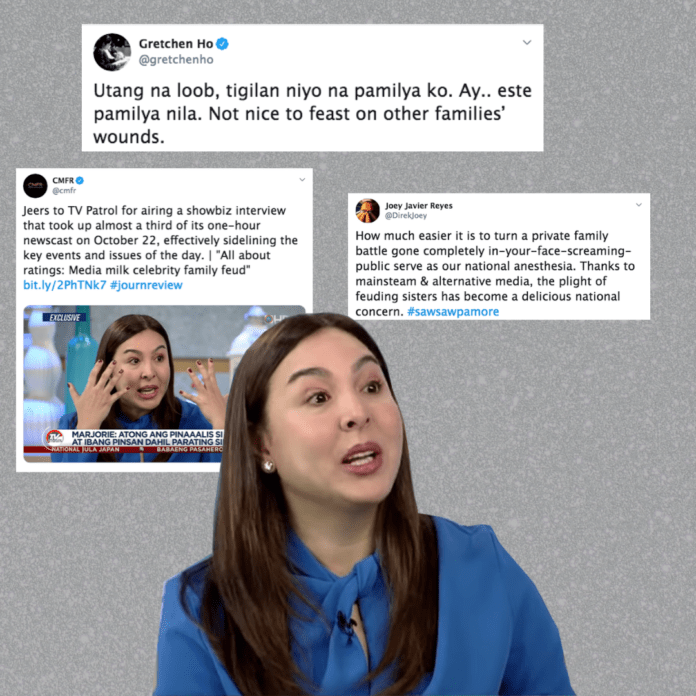 The Barretto family feud has been taking over the country for a week now. From left to right, everywhere you look, their family’s issues are out there for everyone to feast on.

It’s not a surprise that many are done with the “Barretto serye”.

It appears that award-winning director Joey Reyes has had enough of it. In a tweet posted earlier today, he blamed mainstream and alternative media for turning the family battle into a “delicious” national concern.

“How much easier it is to turn a private family battle gone completely in-your-face-screaming-public serve as our national anesthesia. Thanks to mainstream and alternative media, the plight of feuding sisters has become a delicious national concern. #sawsawpamore,” he said.

“Communities are being displaced. Farmers are getting killed. The building of a dam bound to ruin ecosystems is greenlit. The world is burning, but hey, let’s give a notorious gambling operator more airtime for being involved in a family feud that’s irrelevant to survival,” he said.

TV host Gretchen Ho had a different approach and humored the public.

On Wednesday, morning show Umagang Kay Ganda poked fun at the feud and invited Gretchen… Ho for an interview.

“The fate of the nation hangs in the balance,” he said, quoting an ABS-CBN News tweet regarding Atong Ang’s side on the scuffle.

The Center for Media and Responsibility criticized TV Patrol’s use of a third of its newscast on the Barretto feud.

“Most primetime newscasts limited their coverage to their entertainment segments. But TV Patrol assigned Karen Davila to do an exclusive 18-minute interview with one of the sisters, Marjorie,” CMRF said in an article published yesterday.