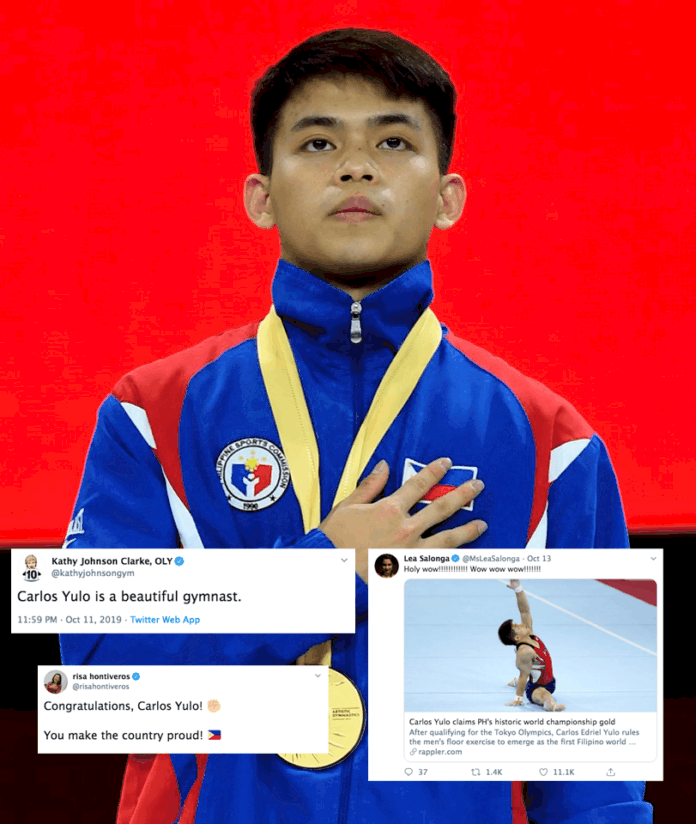 Carlos Edriel Yulo made history as the first ever Filipino gymnast to win a gold medal at the world championships.

Just before the 19 year old’s historic win, he already secured a ticket to the Olympics 2020 in Tokyo, Japan after finishing 10th place in the all-around finals.

Volleyball player and television host Gretchen Ho tweeted her support for the teen and fellow Pinoy as well.

Philippine National Triathlon team Chairman Nikko Huelgas, on the other hand, pointed out that Yulo is the country’s “much deserving Sea Games flag bearer.”

The obviously wowed theater icon Lea Salonga expressed her admiration for the gymnast.

For his part, actor and writer Juan Miguel Severo, quoting Michelle Williams, highlighted the lack of support Filipino athletes get from the government.

“Yulo’s victory matters so much because of how little support our athletes get from the government. Our athletes succeed in spite of it,” he wrote.

A grateful nation plus cash incentives from the government await Yulo’s homecoming on Wednesday, October 16. He is also scheduled to pay a courtesy call on President Duterte in Malacañang.