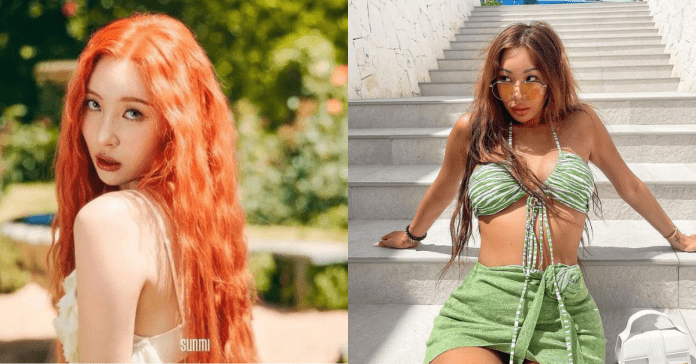 The SBS web variety program originally hosted by Jessi was launched in June 2020, drawing many major guests and K-pop stars over the years.

Jessi’s Showterview featured a total of 155 guests within its two-year run, starting with Kim Young Cheol in the first episode and ending with PSY in the final episode aired last April 29.

At the end of the last episode, Jessi remarked, “I wanted to treat guests comfortably and differently during the interview. It feels good to have done it. I learned a lot from Showterview. I want to come back when I get stronger and brighter.”

Sunmi has reportedly finished filming her debut episode, which is expected to air sometime in July.

The rapper-singer has also spoken up about recently learning from a fan that Sunmi will be the new host.

When fans learned that Jessi herself wasn’t personally informed that she would be replaced, many of them got furious and confused. Jessi said that she was only made aware she would no longer be hosting Showterview after reading a fan comment on Instagram.

The fan comment said, “I want jessi’s showterviewwww plssss. I don’t mean I don’t like sunmi as the host but I’m definitely gonna miss your fun eonnie. good luck both.”

To which, Jessi replied, “Didn’t know. but goodluck to them.”

On her Instagram live last June 25, Jessi addressed the issue, saying she was okay and encouraged fans to support Sunmi and “Showterview”. She said she already reached a point where she no longer needed to be upset or cause controversy over issues like this.

“I really wish the best for Sunmi and Showterview because, yeah I took a break… We weren’t sure if we would come back or not. Most likely we were, but nothing was finalized, but I guess you know, someone, you know my friend Sunmi… they replaced me,” Jessi said.

“When Sunmi comes on, there could be a new content. You know, she has a great personality as well, you know. Give her a chance,” she said as she talked about Sunmi being the new host of Showterview.

On her Instagram live on June 25, Jessi also revealed that she is indeed coming to the Philippines.

“I’m coming to the Philippines, guys. We’re talking about it right now, it’s in the works,” the singer-rapper said.

She said that they were just figuring out which city she would perform in.

Among her other hits are Nunu Nana and Don’t Touch Me with the Refund Sisters.