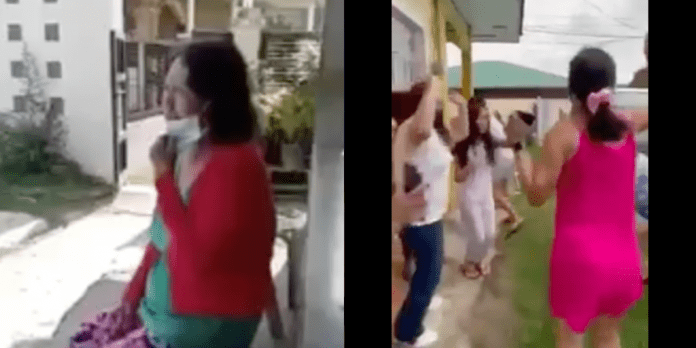 “Kita ko’y nasa likod na ‘yun at paikot ikot,” Nanay Fhelly can be heard saying in the video while crying her heart out.

She was so heartbroken after learning that her pet disappeared from their home. Nanay Fhelly even posted a picture of her cat and offered a P1,000 reward.

One day, someone reached out to them saying they found her cat, but they were asking for a P5,000 reward. She was excited to be reunited with Sky.

Then a white van pulled up in front of their house. She was expecting that Sky was inside the vehicle. But Nanay Fhelly was surprised when she saw her OFW daughters and grandchildren instead.

Nanay Fhelly couldn’t believe it! She immediately hugged them and became emotional after reuniting with them.

According to uploader Dennise Nicole Villena, the whole family had no idea about their cousin’s arrival.

They thought that it could be Sky or a new pet for Nanay Fhelly.

Ellanie said that she and her sister, Kristine, along with their children decided to come home from UAE after learning that Nanay Fhelly got depressed due to Sky’s disappearance.

“Actually we have planned to have vacation this year pero not the day we arrived. We planned May or Sept on School vacation.  Dahil nakita naman ‘yung best part na dapat uwian si inay kaya we decided to re book ticket agad,” Ellanie said.

Unfortunately, Nanay Fhelly did not find Sky. She now, however, takes care of two new cats at home.

Nanay Fhelly became a widow when her husband died in 1992. Since then, she provided for her six children alone.

Five of her children are working abroad, while the other one is working in the Philippines as a government employee.

Ellanie and Kristine stayed in the country for three weeks, where they spent their time with their loved ones.

“We are happy wala katumbas na kaligayahan maiparamdam sa magulang kung gaano siya ka importante at kamahal namin. Ikaw ang aming kayamanan na dapat ipagmalaki.Thank you for all the sacrifices. We love you so much,” Ellanie said when asked about her message to Nanay Fhelly.