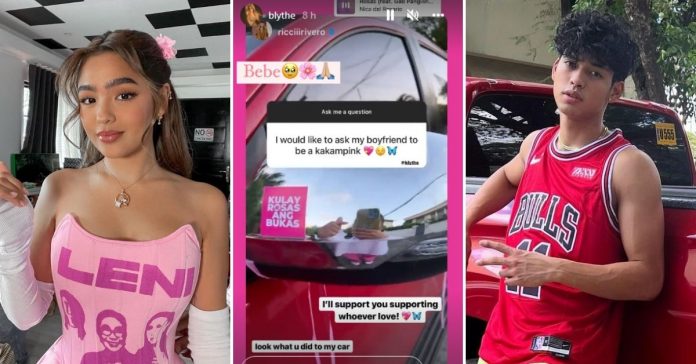 It looks like Andrea Brillantes has been trying her best to convert BBM supporter boyfriend Ricci Rivero into a Kakampink.

In a recent “ask me a question” session of Ricci on his Instagram stories, the Kapamilya actress wrote to her beau: “I would like to ask my boyfriend to be a Kakampink.”

Kakampink is a term used to refer to the supporters of presidential candidate and Vice President Leni Robredo.

The UP Fighting Maroon shooting guard’s response came with photos and video clips of what Andrea has done to his personal items — putting presidential bet Leni Robredo’s campaign stickers on his car, phone case, tumbler and pins on his bag.

In a subsequent Instagram story, Ricci defended Andrea from those criticizing her actions, reiterating that he respects her political beliefs and is proud of her efforts to persuade him and others on who she thinks should lead the country.

“She’s just really trying to make me believe sa kung kanino siya naniniwala. She’s doing something para sa paniniwala niya, and I respect her for that. I’m proud of what my girlfriend’s doing,” said Ricci.

The cager went on to defend his girlfriend that it isn’t just him that the young actress is trying to convince to vote for Robredo in the upcoming May elections.

“I’m not the only person she’s trying to convert kasi ang gusto niya is mapa alam sa tao esp nasa paligid niya na kung sino yung tingin niya best for our country is yung sinusuportahan niya. Kasama lang ako dun sa mga yun and this isn’t about her being a perfect girlfriend or whatever, it’s about her doing her part to let people know, understand, and believe in someone who she thinks is best to serve all of us,” he added.

Ricci last February tweeted his dismay about people “hating on other candidates.”

As the tweet drew mixed reactions, an old Twitter post of the basketball player supporting the vice presidential candidacy of the late dictator Ferdinand Marcos’ son Bongbong Marcos back in 2016, also resurfaced.

Andrea, meanwhile, has been vocal of her support for Robredo, recently gracing the stage of the latter’s star-studded birthday rally in Pasay City.