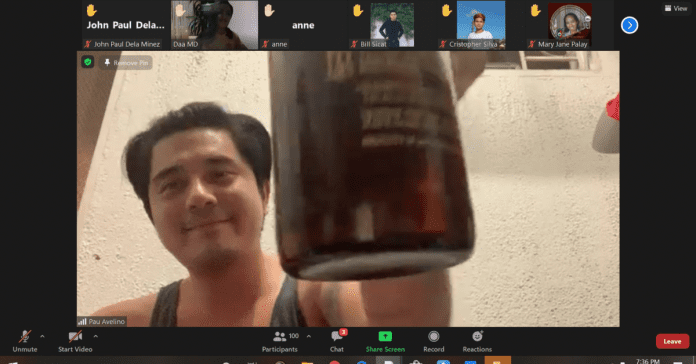 Paulo Avelino recently took to social media to search for online drinking buddies, and fans couldn’t be any more willing to take up on his offer.

“LF: Ka-inuman,” the actor tweeted Tuesday evening which his followers readily replied to.

After getting enthusiastic responses on Twitter, the Marry Me, Marry You star suggested opening a Zoom link for the instant “e-numan” session where he jokingly said he would just be listening to his fans as they talked to each other.

The actor, giving in to the fans’ requests, later on tweeted an open Zoom link account that allowed the first 100 participants to enter.

Fans, who entered too late, expressed their sadness for missing out on the actor’s impromptu online drinking session.

In a screenshot posted on a now-viral tweet from a Zoom participant, Avelino was seen raising a bottle of beer to the screen as his fans virtually raised their hands in support.

(Faith Yuen Wei Ragasa is a cat lover, a pianist and a coffee addict who spends most of her time thinking of ways to bug her only younger sister.)