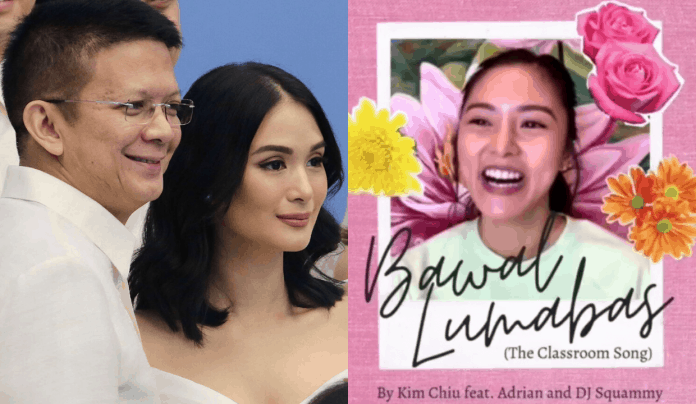 Heart Evangelista and husband Sorsogon Governor Chiz Escudero lauded Kapamilya star Kim Chiu’s way of rising up from one of the “lowest moments” in her life following the release of her new single Bawal Lumabas, which was drawn from her controversial ‘‘classroom” analogy.

Notwithstanding the harsh criticisms she received online, Kim released a full version of the viral song in her vlog with the help of Dj Squammy and songwriter Adrian Crisanto last Monday, May 18.

Heart and Chiz were one of those who congratulated Kim for turning something negative into positive.

“This how to handle and do it!!! Congrats ⁦@prinsesachinita⁩ You just showed everybody how to turn lemons into lemonade!!! Kudos to you!!!,” tweeted Escudero.

“We love you @prinsesachinita at the end of the day … you can never put a person with a good heart down,” wrote Heart.

Kim, on the other hand, retweeted her “Lodi forevs” tweet with heart emojis.

The Kapamilya actress on Thursday shared that her new single has reached 10 million views across social media platforms already.