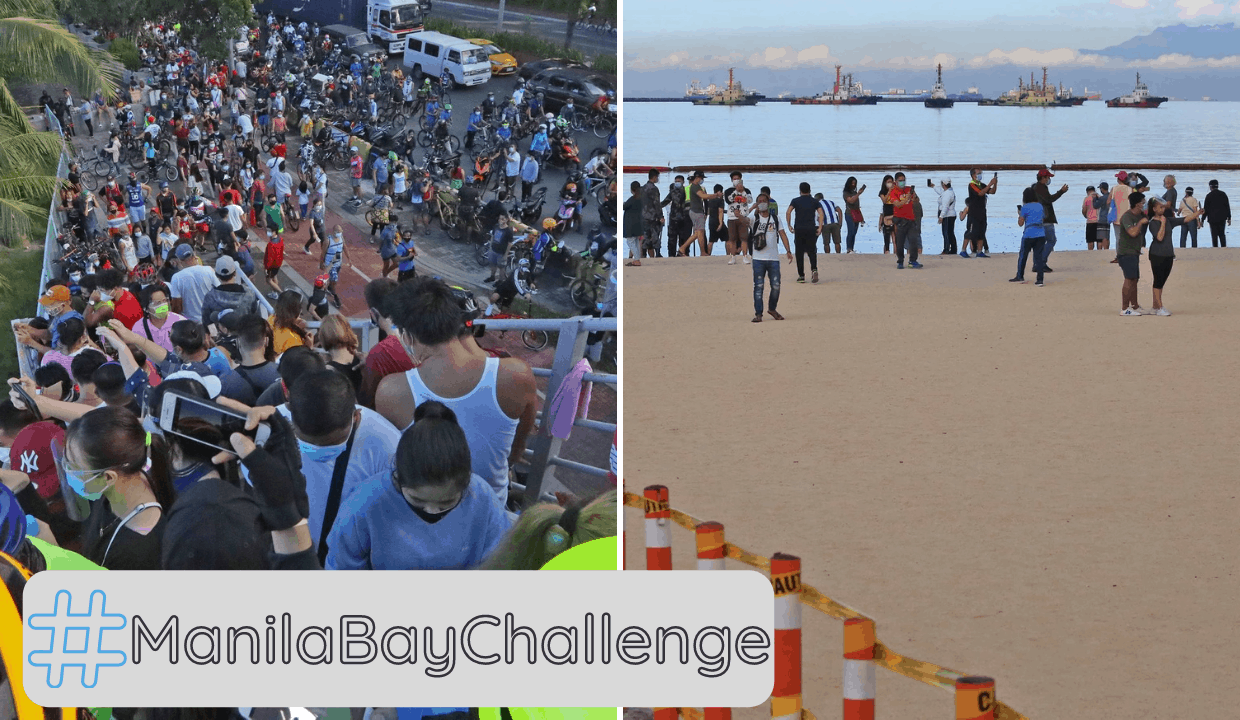 A portion of Manila’s landmark tourist attraction was temporarily opened to the public over the weekend to celebrate the International Coastal Cleanup Day.

For several people, it became an opportunity to take videos and selfies of the government’s much-talked-about beautification project that used crushed dolomite boulders for the “white sand” beachfront.

But the large crowd that shrugged off strict physical distancing protocols quickly turned into a meme-worthy subject on social media.

A quick search on Facebook revealed about 400,000 #ManilaBayChallenge posts.

This netizen went viral after she stopped by Manila Bay donning a one-piece swimsuit.

Using a photo that shows a crowd gathering at an overpass to catch a glimpse of the artificial sand, social media users poked fun at what the group could have been swarming for.

A fan of Thai actors Bright and Win joked that the two were spotted hanging out at Manila Bay.

Ex-couple James Reid and Nadine Lustre were also found cuddled up on the white sand beach.

Mr. Bean? It seems like he’s out with Teddy on the beach as well.

“Kaya naman pala nagkagulo,” a fan said to Solenn Heussaff, who shared a meme that showed a beach scene from the Temptation Island remake.

According to The STAR, only 70 persons per batch were allowed to enter the opened portion of the coastline, and they could only stay for three minutes.

In a separate report by the STAR’s Marc Jayson Cayabyab, Ermita station commander Lt. Col. Ariel Caramoan was administratively relieved for failing to ensure social distancing among those who visited Manila Bay.

Department of Health Undersecretary Maria Rosario Vergeire expressed her concern over the matter. She emphasized that while these projects are favorable, minimum health standards should still be enforced.

LOOK: Xian Lim learns how to fish in Manila Bay