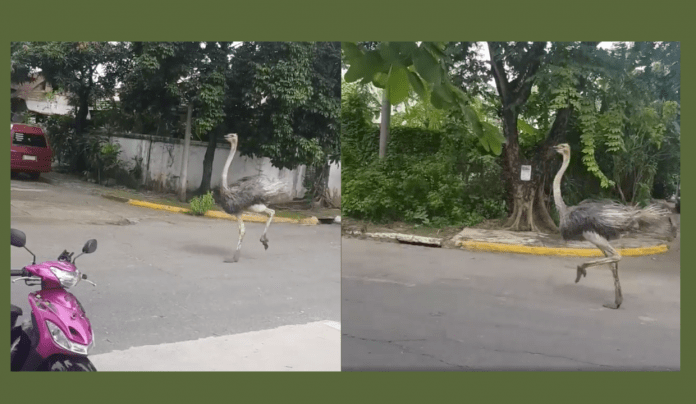 On Tuesday, netizens were surprised after an ostrich running loose in a private subdivision in Quezon City was caught on camera.

The netizen who witnessed the odd scene said he was buying goods when he heard that two ostriches were out and about in the area. Dino Rivera was surprised when one of the birds appeared and started running amok.

“I have seen weird things in my life but this one ranks up there,” he said on social media.

On Twitter, netizens were swept by the random news of ostriches — the world’s largest living bird species — running around. Others were reminded by the ostrich scene from the Hollywood film Jumanji. Some even said the scene was their mood for 2020.

Here are some of their reactions:

While some joked that the ostrich should not be allowed to leave the subdivision since it doesn’t have a gate pass.

Another netizen joked that the ostrich in QC is proof that the earth is healing.

While others layered their favorite songs to match the video of the ostrich running.

As of writing, the ostriches were already brought back to safety.

According to The STAR, the ostriches were rescued by concerned individuals, including a security guard and an electric company personnel who happened to be in the area.

The ostriches are reportedly owned by one of the residents in the village.