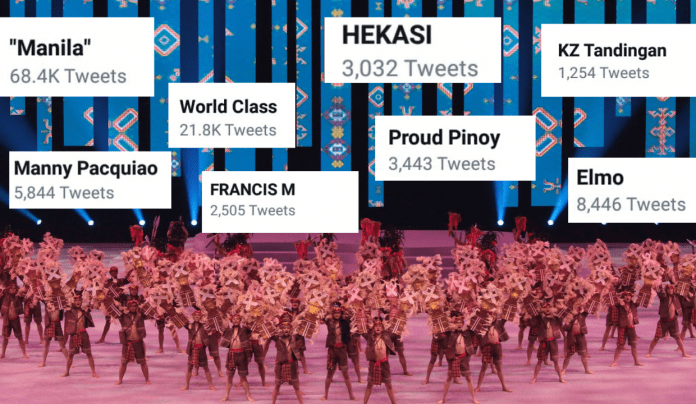 Netizens took to Twitter their views and opinions as the 2019 Southeast Asian (SEA) Games officially kicked off Saturday at the Philippine Arena.

Here we have listed the topics which have trended during and after the SEA Games opening ceremony.

The official hashtags #SEAGames2019, #30thSEAGAMES, #WeWinAsOne were the widely used hashtags as netizens aired their thoughts and named their favorite moments during the grandiose opening ceremony.

Elmo Magalona and Francis M trended after Elmo sang his late father’s (Francis Magalona) rap song Man from Manila. Netizens were all praises for the singer-actor for performing the song which gave them the “feels”.

Duterte. President Duterte made it to the top trending topics after he was shown waving and clapping his hand while Filipino athletes marched and danced to the beat of Manila by Hotdog.

Bato. Same situation with President Duterte, Senator Ronald “Bato” Dela Rosa enthusiastically did a chicken dance while the OPM hit song was playing in the background.

Manila. This 70s song by Hotdog just hyped up everyone inside the Philippine Arena. The classic OPM was played during the entrance of the Filipino athletes and delegates, which had everyone dancing and singing along.

Proud Pinoy. Upon witnessing the breath-taking spectacular event, Filipinos be like: Proud!

World Class. Netizens were all-praises for the historic event and can all agree that the show-stopping performances and the Pinoy talent were indeed world-class.

Laban Pilipinas. Cheers to our athletes who will be competing in this year’s SEA Games!