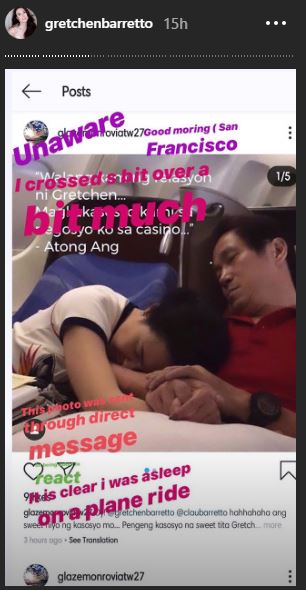 Gretchen Barretto has responded to leaked photos of her with businessman Atong Ang now circulating online.

The photos of Gretchen sleeping in an airplane while holding hands with Atong has sparked speculations on their relationship.

In her Instagram Stories, Gretchen reposted the photos posted by netizens and reacted to them.

“Unaware. Good morning, San Francisco. I crossed (a) bit over a bit much. This photo was sent through direct message. I’m being asked to react. It is clear I was asleep on a plane ride,” she wrote along with the “holding hands” photo.

She also reposted other photos of her with the businessman in the airport, saying: “Nothing wrong with these photos. Fully clothed, no naked photos like of (Marjorie itchie-very).”

Gretchen has consistently denied her relationship with Atong, saying that they are only “business partners”.

In Marjorie’s TV Patrol exclusive interview on Tuesday evening, however, she alleged that her older sister has romantic involvement with Atong, adding that she “stole” him from their niece Nicole Barretto.

Atong, on the other hand, earlier released a statement to ABS-CBN that he has no romantic ties with any of the Barretto women.

‘We are complete’: Gretchen Barretto pays last respects to father