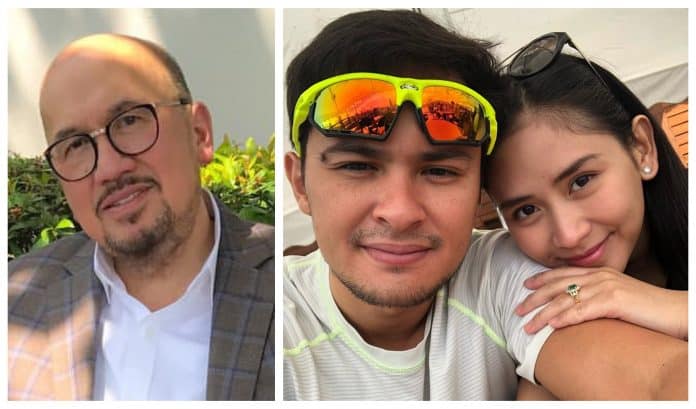 Sarah, 31, and Matteo, 29, had a hush-hush wedding on February 20 that only invited Matteo’s family.

In an interview with Raffy Tulfo for his radio program Wanted sa Radyo on Monday, Boss Vic — as he is called in showbiz circles — said that he was called to go to the restaurant of a luxury hotel in BGC to talk to Mommy Divine, after she came uninvited to the dinner, which turned out to be a wedding reception.

Viva is the talent management agency that runs the careers of the newlyweds.

The sudden arrival of Divine, who was reportedly left in the dark on the nuptials, resulted to a “commotion.” (READ: From shouting match to crying bride: Bodyguard bares details of commotion at Sarah-Matteo wedding.)

It was Matteo who requested him to intervene, he said.

He described Mommy Divine as hysterical because she was caught off guard by the couple’s move to wed.

But he advised Mommy Divine to let the couple be because they are already married.

He maintained that the reaction of Mommy Divine was typical but he is positive that everything will be resolved in due time.

No punching incident, according to Sarah

Boss Vic was interviewed over the phone after Sarah’s close-in security detail complained to the TV5 news anchor Raffy Tulfo about being allegedly “punched in the throat” by Matteo after the February 20 wedding.

Matteo had earlier denied the incident. (READ: Matteo Guidicelli ‘did not punch anyone during civil wedding’ with Sarah Geronimo, says witness.)

The Viva head honcho said he didn’t witness the punching incident as alleged by the bodyguard, identified as Jerry Tamara, who earlier claimed in a police blotter report that he was accused of informing Divine about the wedding.

The security detail maintained that he was also clueless on the wedding but was surprised when Sarah told them to go home without her. “First time niya ginawa yun na pinauwi kami ng una,” Tamara said in his interview with Tulfo.

He said he had to report to Divine, his employer, the whereabouts of Sarah because it was his job.

Nevertheless, Boss Vic said he was able to immediately talk to Sarah herself who strongly denied it happened.

Watch the full interview below: