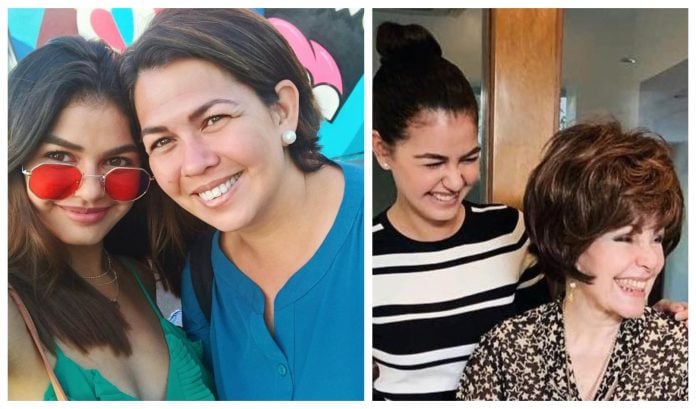 Lotlot de Leon posted on Wednesday about the hard work that went into having a complete and united family, stressing that no family member deserves to be publicly shamed over a perceived mistake.

The Instagram post came with a happy family photo that showed her with siblings Ian and Matet de Leon and their families, and her current husband Fadi El Soury and former husband Ramon Christopher Gutierrez and their children.

Lotlot has four children with her ex, including actress Janine Gutierrez.

Lotlot wrote in the caption: “Pinaghirapan namin ito… itong relasyon naming lahat para mabuo, maging isa… we have learned to set aside all our differences, we have learned to forgive. Oo, hindi naging madali… it took years to build … but one (thing’s) for sure ang RESPETO namin para sa isa’t isa ay andyan. We have learned through the years on how to talk, as a FAMILY.”

She further wrote about never putting a family member in the bad light just because one feels that he or she’s right and the other is wrong.

“Understanding the other. Personally give advices, solicited or unsolicited na hindi na kakababa ng pagkatao! And TRUTH. You don’t bring one down just to prove na tama ka! We don’t do that! Because nobody deserves to be treated that way. We have never crossed that line because we know it’s WRONG!”

She added that she will protect her family whatever it takes. “Ang pamilya ay pamilya kahit ano ang mangyare. I will always protect my FAMILY! NO MATTER WHAT IT TAKES!”

While no name was mentioned, the lengthy post came after her former mother-in-law Pilita Corrales’ revelation that she scolded her granddaughter Janine over her tweet on the TV comeback of Sen. Bong Revilla. (READ: Pilita Corrales pinagalitan si Janine Gutierrez dahil kay Bong Revilla.)

“Bago ako mag-umpisa Lolit, pinagalitan ko si Janine kahapon,” said Pilita during her guesting on Tuesday at the digital show Take It, Per Minute! (Me Ganun) of Pilipino Star NGAYON.

The show is hosted by Cristy Fermin, Mr. Fu and Lolit Solis, the talent manager of Sen. Revilla, who previously called out Janine for her “so cruel” comment on “the second chance” given to the actor-politician.

“I said, ‘You’re wrong. When you are wrong, you’re wrong.’ Wala naman na siyang… Ang sabi niya, ‘Yes, Mita (short for Mamita), yes Mita. Sometimes kasi she’s ano… Ang sabi ko, you don’t do that, you can’t say that. Who do you think you are?” Pilita narrated what she told Janine. “Sinabi ko talaga sa kanya na sometimes, you just open your mouth and you don’t know. Maybe you meant oh my God, so exciting. You didn’t do that Janine.”

Lotlot had earlier defended her daughter, saying: “Buong puso kong maipagmamalaki that I have raised a daughter that is very respectful, level-headed, smart, humble and willing to take risks when needed.”

Janine Gutierrez responds to comments telling her to stay out...