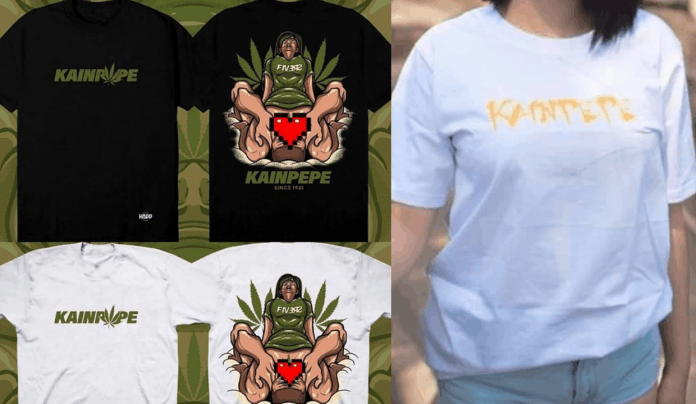 A clothing line called Kain Pepe previously caught the ire of netizens for its “disturbing and malicious” brand name and designs.

Netizens have earlier expressed their disappointment with the clothing line for using a woman’s private part in most of its t-shirt designs and young girls as endorsers and models.

Kain Pepe trended Friday night after its owner defended why it was named that way, but social media users are not having any of it because its “vulgar” designs say otherwise.

In a post on its now-deactivated Facebook page, KNPP Clothing said that “the real purpose of the brand name is simply to encourage adolescents and teenagers to eat properly”.

The post said that “Pepe” is common Filipino nickname for young boys and “Kain” is simply a word which means “Eat”.

KNPP Clothing Line also further said that it was named that way so it would catch people’s attention easily.

“Most teenagers nowadays lack proper nutrition because of gadgets and social media which cause them sometimes to miss a meal. Through the shirts, they are at least reminded to also pay attention to their nutrition.

“That’s what we really want to convey. Objectifying women is definitely not the intention.”

The clothing line owner felt saddened that instead of getting support from the people, they are criticized for their “creativity”.

“Please get a sense of humor and stop forcing on women your idea of what makes them ‘respectable’. Respect is subjective on a person to person basis.

“The purpose of this shirt is not to objectify but pure heart.”

Social media users, however, grew much more dismayed with the clothing line’s “lame excuse”. Some expressed that they are not buying its humor for it obviously promotes sexual harassment and women objectification. Some even suggested how it should be presented based on its said purpose.

The women’s rights organization said that they are willing “to provide Gender Sensitivity Training to the brand owners of KPP in order to heighten their awareness of gender concerns and be willing to respond to gender issues.”

Solenn Heussaff is launching clothing line for preggos and breastfeeding...

Maine Mendoza is 2019’s most tweeted about Pinoy celebrity, plus...