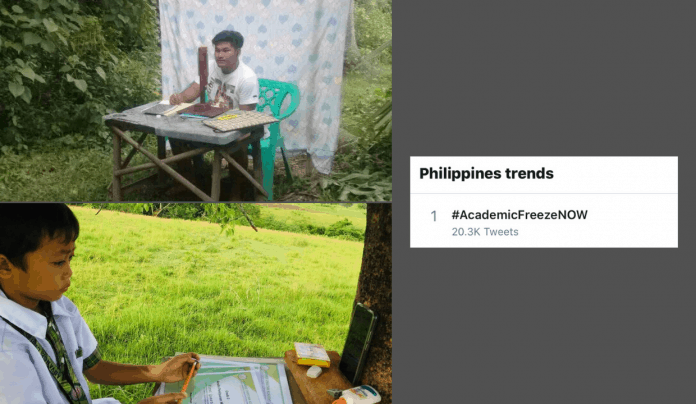 #AcademicFreezeNOW landed the first spot on Twitter Philippines’ trending list after students on social media aired out their grievances on enduring the difficulties of online classes.

It’s been almost a month since online class commenced for a handful of students in the Philippines. As these students get their first taste of the new normal learning, many realize the struggles to attain education especially in the time of a global pandemic.

Twitter users agreed that classes for all levels this academic year should temporarily “freeze” or be “suspended”. Over 20.3k tweets on the matter surfaced on September 3.

A netizen said the academic freeze does not imply that students do not want to pursue their education, but that the online classes are not effective for learning.

A mother shared her perspective on online learning, saying she worries her three kids are “not actually learning anything and just doing the assigned activities.”

This concerned schoolmate spoke for his classmates who have decided to stop their schooling to save their parents’ hard-earned money.

Another worried netizen shared how her fifth grade brother was kicked out of his online class because his camera was malfunctioning.

Others stressed that online classes financially and mentally strain families that do not have a source of income during the pandemic.

Since the start of online classes, stories of students going out of their way to survive the new normal of schooling filled social media.

Joseph Andal, a Mechatronics Engineering student in Batangas, lamented on the hardships of attending online classes.

The lack of a stable internet connection forced him to build a makeshift study area outside their house.

While Rejhon Soriano Modesto, a senior high school teacher, shared his conversations with his students who are struggling to attend his classes.

One student asked about the repercussions if he would be late to class since he works early in the morning to acquire money to pay for wifi connection. While another shared that he rented a cellular phone just for their classes.

A young student in Alicia, Bohol also went viral after his aunt Giecel Marie Curancurang shared how the boy would attend his online classes in a treehouse due to signal problems in their home.

“We ended up on a hill because there’s not network signal at our place,” Giecel said.

The Department of Education moved the opening for the next school year from August 24 to October 5. They clarified that the private and non-DepEd schools that have already started classes can proceed.

Maine Mendoza is 2019’s most tweeted about Pinoy celebrity, plus...