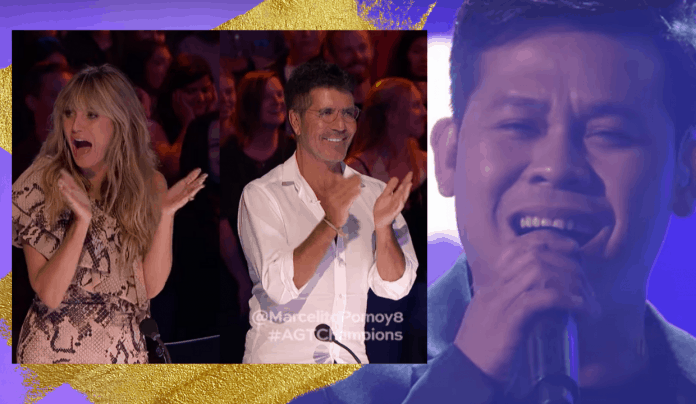 WATCH: Marcelito Pomoy gets a standing ovation from America’s Got Talent judges, crowd

Pilipinas Got Talent Season 2 winner Marcelito Pomoy wowed American audiences with his impressive performance at the America’s Got Talent: The Champions episode on Tuesday.

Pomoy is once again introducing himself to the world as he joins the reality TV show where “40 unbelievable acts from around the world, compete to be declared the best of the best”.

The singer received a standing ovation from show’s judges and audience members as he switched between the male tenor and female soprano voices, singing the parts of both Celine Dion and Andrea Bocelli in a beautiful rendition of their duet, The Prayer.

“Oh my God. That was so unique! You are a beautiful, wonderful singer with a young woman trapped inside of you,” Howie Mandel commented.

“I want to see something different, something unique, and Marcelito you just gave that to us. It was absolutely brilliant,” Alesha Dixon added.

“Honestly, this is one of the craziest things I ever heard in my entire life. Your voice, your range, your sound is just so out of this world,” Heidi Klum said.

“That was what I call a 10, as simple as that. I have a feeling that the super fans will put you through to the next round,” Simon Cowell also said.

In a tweet by ABS-CBN showbiz reporter MJ Felipe, Pomoy met and took photos with the TV show’s judges after his performance. He was also told by Simon Cowell that he was a “great singer”.

Pomoy’s performance, which was uploaded on the show’s social media accounts, has six million Facebook views and 750,000 YouTube views as of writing.

Pomoy is now headed for the semi-finals after getting the votes of superfans — a new element added to the show.

Here are other notable performances of the Filipino talent: