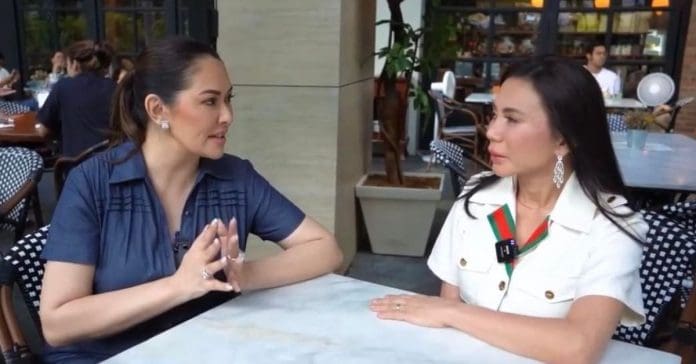 Ruffa Gutierrez finally talked about her “traumatic married life” with her ex-husband on Vicki Belo’s vlog.

On the vlog that was uploaded on July 14 on the celebrity doctor’s YouTube channel titled “Ruffa Gutierrez finally opens up about ‘traumatic married life’ after 15 years!,“ the actress opened up about her previous marriage with Turkish businessman Yilmaz Bektas and also talked about her two daughters’ reunion with their father.

The celebrity mom admitted she had long since forgiven her ex-husband after they wed in 2003 and separated four years later after having their two daughters, Lorin and Venice.

Her two girls took a flight to Turkey last month to reunite with their estranged father after 15 years.

“I guess time heals all wounds, and I think in God’s perfect time, it just came naturally already a long time ago,” Ruffa said.

“I’ve forgiven him. I sent Lorin and Venice on their own to Istanbul. I just felt really light about it. I prayed about it,” the actress continued.

Ruffa added, “And I said, ‘God’ if this is the right timing that Lorin and Venice should reunite with Yilmaz, give me a sign.’”

The actress thought that the sign that she was praying for was just “being comfortable, being light, being at peace.”

Prior to the reunion, Ruffa said that her children never saw their dad after leaving Istanbul. She said she was open with her children meeting their dad only in the Philippines or a neutral country.

“I guess at that point in my life, you know, I was very afraid. I was scared of what happened sa paghihiwalay namin and syempre di mo ko mabe-blame,” she said.

When Vicki asked about her love life, the actress said that she doesn’t have a love life and that she’s “busy working.”

The celebrity mom also said that she does not need a man at this point in her life.

“I don’t know if I want to get married again. I’ve left that in the hands of the Lord. All I know is I’m not gonna end up alone,” she said.

In an interview with The Philippine STAR, Ruffa said she and ex-husband Yilmaz are now “very cordial.”

READ: Ruffa Gutierrez’s daughters reunite with their dad after 15 years

Annabelle Rama hits back at allegations against daughter Ruffa kicking...