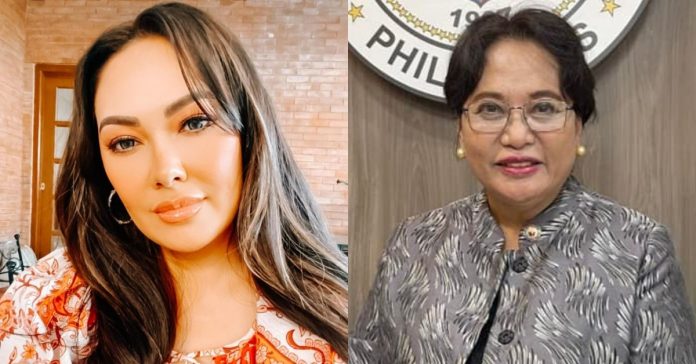 Ruffa Gutierrez denied allegations that she fired two of her household helpers without paying their salaries, adding that she is set to take legal action over the incident.

The actress took to Twitter on Friday, July 8, to respond to former Comelec Commissioner and now P3PWD party list Rep. Rowena Guanzon for a tweet over an alleged incident where Guanzon’s friend had to “rescue two household helpers who were thrown out of a first class village” with salaries unpaid by their employers.

The party list representative particularly called the attention of Gutierrez in a quote tweet and asked her if the claim about the incident was factual, to which the actress clarified was “not true” and explained her situation.

“Hello Ms. Guanzon, No it’s not true. There was a situation at home while I was shooting on the set of “Maid In Malacañang”, so my staff had to call security to make sure my children were safe,” Gutierrez wrote.

In another tweet replying to Guanzon, the actress also made it clear that she “did not fire anyone,” and that the household helpers in question “wanted to leave on their own accord.”

Gutierrez further explained how the two recently-hired household helpers have been getting into fights with their 68-year-old senior colleague, who has been working for her for more than 18 years, as well as with other members of her household staff while she was out filming a movie by director Darryl Yap.

“Nang-aaway po sila sa ibang mga kasamahan sa bahay ng wala po ako. They were demanding to leave the house, which I said they were able to do AFTER I returned home from work, so I could talk to them before they leave,” the actress added in another tweet.

Gutierrez then stressed in another tweet how she is “always very generous” to those under her employ and said that most of their family helpers have stayed with the household for 13 to 35 years.

“We are FAMILY. Through thick and thin, ika nga,” she added.

In the same tweet, the actress then told Guanzon that she would be taking legal action about the incident.

“My lawyers are on top of the situation. Thank you and have a great day po,” she wrote.

As of writing, Guanzon has yet to reply directly to Gutierrez about the actress’ response, and the two are also yet to give further details concerning the incident.

The party list representative, who is known for her snappy remarks, however, has indirectly tweeted about Gutierrez the following day in jest for not addressing her as “congresswoman”, possibly referring to how the actress called her “Ms. Guanzon” in one Twitter post.