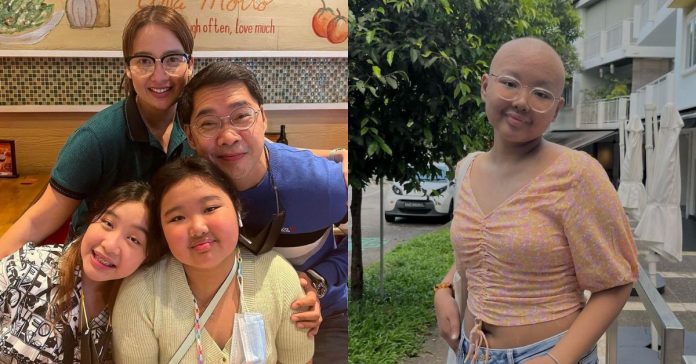 Zoey, eldest child of veteran broadcast journalist Anthony Taberna, opened up on her battle with leukemia and revealed that she is now free of the disease, about two years after she was diagnosed in December 2019.

In an Instagram post last Monday, July 4, Zoey shared how she had been “smoothly” getting treatment and undergoing chemotherapy since her diagnosis until she started to feel pain in “several parts” of her body by December 2021, which prompted the family to bring her to the hospital.

After undergoing tests, Zoey said that doctors revealed to their family that her leukemia had morphed and that “the cancer cells that was supposed to be long gone, came back in a way more dangerous and fatal form.”

“I had a hard time understanding why this was happening because from the start, my doctor said that this situation was very rare,” she said.

Due to her condition, Zoey and her family had to go to Singapore amid the pandemic in January this year and stayed there for almost six months to get her treated.

“When I heard that I was going to do intensive chemo again, I got so scared. Especially because I knew how it felt because this already happened before,” she said, recalling the side-effects of the medications.

Zoey then admitted to feeling down and hopeless as she was getting treated in Singapore.

“I’m not gonna lie, there were so many times that I thought that it was the end for me. That my life would end at 13 years old,” she said.

She also revealed how she had felt guilty towards her younger sister, Helga, who she is “more than grateful” for becoming her bone marrow donor when she needed a transplant.

“I felt like I deprived her from being with the people she wants to be with and going to places she wants to go because she was stuck with me. So I’m more than grateful that she did this and sacrificed for me,” Zoey said.

Amid all that and “despite being in terrible pain,” Zoey said that with the love and support of her loved ones and God, she was able to muster her strength and overcome this major challenge in her life.

“After 167 long days, we went back home to the Philippines. And now I am totally cancer-free!” she said.

“I couldn’t have done all of this without the help, support and love of everyone special to me and most of all, God. I never forget to thank Him everyday for healing me and for giving me a chance to live a longer life,” she added.

Zoey then went on to express her love and gratitude towards her loved ones, her medical team, and everyone else who has shown their support and has been with her in her journey battling cancer.

“I guess it’s safe to say that that’s the end of my cancer journey, thank you so much,” she said.

Back in December 2020, Zoey also opened up about her condition via Instagram. She was initially diagnosed with bone marrow disease, which was later found to be leukemia.

‘So proud of you’: Anthony Taberna calls daughter Helga a...