Nayeon’s POP! is a bop: K-pop idols, local celebs do the #PopPopPop challenge 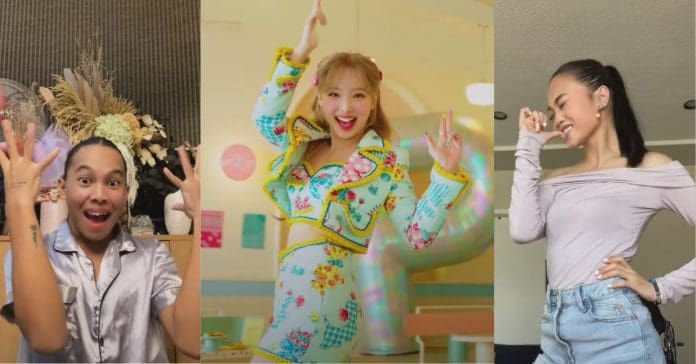 Hey ONCEs, have you done the #PopPopPop challenge yet?

There’s no denying it. With its catchy, feel-good tune and vocals, POP! by TWICE’s Nayeon is definitely a bop!

It is also no surprise that the dance choreography accompanying the song has been equally well-loved and hooking K-pop fans and idols alike. It has resulted in the fun #PopPopPop dance video challenge, which seemed to have been started by Nayeon herself.

The POP! singer was even seen doing the dance challenge while wearing an adorable bunny suit.

Nayeon was eventually joined by fellow TWICE member Chaeyoung, who in turn, donned a clown-like costume.

She also had TWICE’s Momo and SHINee’s Key joining in on the fun dance trend.

Members of K-pop girl group ITZY also did their own version of the #PopPopPop challenge with Nayeon.

Meanwhile, it seems like the POP! craze has also made its way to Philippine shores as local celebrities and personalities try their hand at the dance challenge.

Artist and dancer AC Bonifacio took to TikTok to share her dance cover of Nayeon’s song.

Kapuso actor Paul Salas also did the #PopPopPop challenge, writing “I tried my baby nayeon” in the caption for his TikTok video along with the comment “SANA MAKITA NI NAYEON 😅😢😢😢.”

Actor and comedian Awra Briguela also joined in on the dance challenge.

Vlogger and fashion designer Mimiyuuuh was also seen doing the dance with her brother.

And if ever you want to try your hand at the dance challenge, Manila-based South Korean dancer Dasuri Choi has your back with a slowed-down tutorial.

TWICE’s Nayeon recently made her solo debut last June 24 with her first mini-album IM NAYEON, which includes POP! as one of its seven tracks.