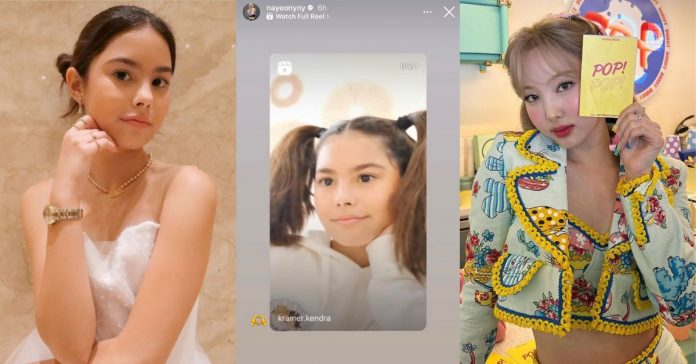 Team Kramer’s eldest child is one lucky fan as her favorite K-pop idol, Nayeon of Twice, reposted her Instagram reel on her story.

Kendra took to Instagram on Monday to share a recording of Nayeon’s Instagram story which featured a video of her vibing to one of the K-pop star’s new songs, No Problem.

“I can’t breathe! This is truly a dream come true to have your favorite K-pop idol repost your reel! ♥️♥️♥️♥️ Forever a fan of yours @nayeonyny!💘” she wrote.

“I’m keeping this on my feed so i’ll never forget this moment! 💗💞,” her caption also read.

This, however, was not the first time that Kendra had the chance to live out every fangirl’s dream.

Early this month, Kendra was moved to tears after she received a signed Im Nayeon album from the K-Pop star for filming and posting the same Instagram reel, as seen on a vlog posted by Team Kramer on Facebook last July 4.

“After doing a Reel and Collab for Nayeon, she gets sent a signed album! She’s joyfully crying right now,” the Facebook video’s caption read.

“I dubbed the song ‘No Problem’ on my Instagram account. It’s part of her solo album and I’m very happy because she’s my bias in TWICE and I like her a lot,” Kendra said in the vlog.

Kendra Kramer is a beaut at 13!