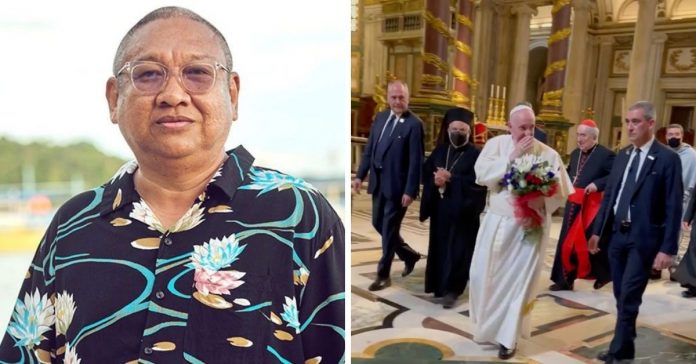 Erik Matti lucked out in Italy when he witnessed Pope Francis at The Basilica of Saint Mary Major in Rome, Italy.

The On The Job filmmaker shared on his Instagram, a video of the pope stopping to bless him and his group at the church.

Matti shared that they were given information on the pope’s arrival from his trip to Slovakia by a Filipino priest. They were also told that Pope Francis has a “soft spot” for Filipinos and would love to be greeted with: “Viva Lolo Kiko!”

The director, who was in Italy recently as On The Job 2: The Missing 8 competed in the the Venice International Film Festival, was joined by his wife, screenwriter Michiko Yamamoto.

“The Pope marched inside the church at 3:40pm. Michikuda clutches all the rosaries for our families in ready for God’s graces to shine upon it. The Pope strides closer. Michiko readies to shout. He is a few feet away limping towards the chapel where he will offer a single rose to Mama Mary,” he recounted the moment.

Matti’s efforts were not put to waste as him and his group caught a glimpse and even a smile from Pope Francis.

“The Pope smiles. Blesses us all. Now, I can sin some more,” he joked.