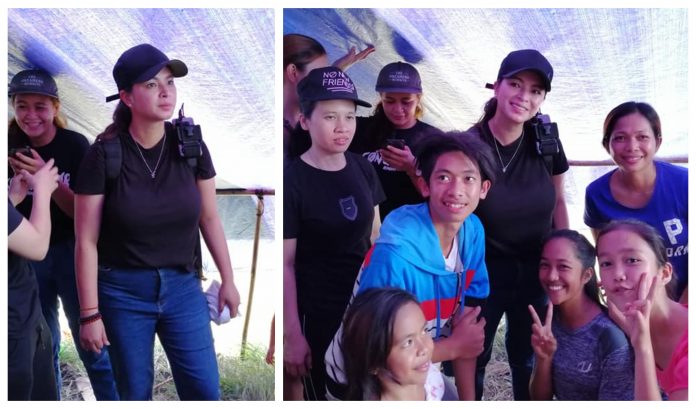 Earlier, it was reported that the 34-year-old TV and movie star was in Davao Del Sur for distribution of relief goods, in coordination with the local chapter of the Philippine Red Cross. Angel is a long-time supporter and volunteer for the humanitarian organization.

In a series of photos posted on Facebook by local resident Flora Mae Montes Basiliote, the actress was seen mingling with the people and distributing a truckload of goods at Barangay Batasan in the Makilala town.

Angel reportedly arrived in Makilala, which is some 49-km. away from Digos City, past 2 p.m. with businessman-fiancé Neil Arce and some volunteers. According to beneficiaries, the actress gave care packages that included rice, canned goods, hygiene kits and even underwear.

Locals said they were very happy to see Angel for taking the time to visit them despite their very poor conditions.

Residents were forced to stay in makeshift tents because their covered court, which doubled as an evacuation center, collapsed due to the two consecutive, powerful earthquakes that struck central Mindanao this week.

(We’re very thankful for her visit. She’s not like other prominent people who can be fussy. She didn’t hesitate to visit each of our quarters even if they were very dirty and people were sick.)

After visiting their area, Angel told them that their group was proceeding to other quake-hit areas, but that she promised to come back and check again on the quake evacuees.

Nevertheless, they hope Angel’s visit will touch the hearts of more people to extend any form of help and assistance to the suffering quake victims, who have lost their homes and livelihood, among others.

(We’re really not okay especially because we lost our homes. We have no medicines, flashlights, emergency kits, protection against mosquitos. We have no proper place to stay. There’s no proper hygiene. I really don’t know what will happen in the next days, if our water will still be safe for drinking and consumption. We lack clothes because they were buried along with our belongings. We really pity the small children.)

Citing figures from the National Disaster Risk Reduction and Management Council, Philstar.com reported that the 6.6 and 6.5 magnitude quakes that hit several areas in Mindanao in the last days of October have resulted to 16 persons dead, two missing and 403 injured.