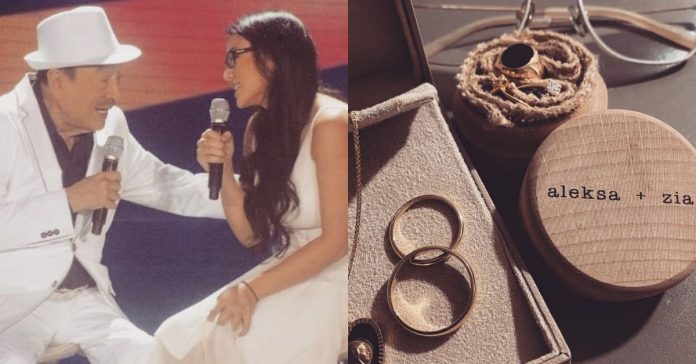 Zia Quizon appeared to be hinting at getting married in a poem that she dedicated to her dad, “King of Comedy” Dolphy, on his 10th death anniversary.

On July 10, Zia took to Instagram to honor her late father by posting a throwback photo of them from one of their performances together.

“Dear Papa, How I miss you/ How I wish that you were here/ To walk me down the aisle/And smile/ And maybe shed a tear./ I knew this day was coming/ And I knew that you’d be gone/ But still I hear you humming/ Strumming to a joyful song,” Zia said.

“No, it isn’t how I planned it/ But he’s all I hoped he’d be/ There is family that’s chosen/ And I chose what’s best for me./ Maybe somewhere you are watching/ Over on some distant star/ And I’m sorry you won’t be here/ But the truth is that you are,” she added.

Alongside the photo of Zia with her father is a photo of two rings and a necklace, with the names “aleksa + zia” written on a circular object next to the rings.

Zia is the daughter of “Divine Diva” Zsa Zsa Padilla and her late husband “King of Comedy” Dolphy Quizon. The singer-songwriter is also well known for her hit OPM song Ako Na Lang.

The film icon Dolphy passed away from chronic obstructive pulmonary disease on July 10, 2012.

‘You brought sunshine in our lives’: Zsa Zsa Padilla remembers...