‘I never cursed the Philippines’: Lea Salonga clarifies but stands by viral post 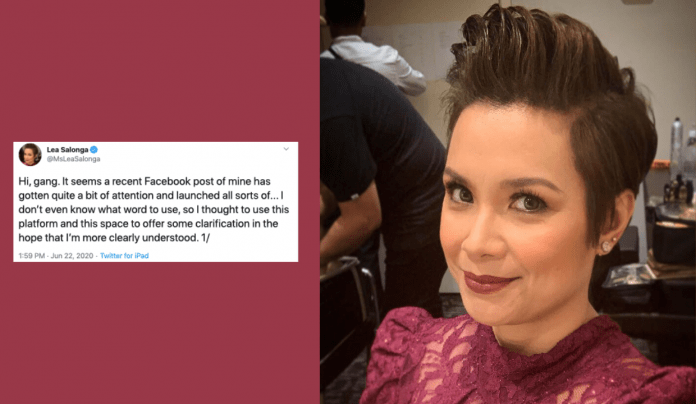 Broadway superstar Lea Salonga clarified that she did not curse the Philippines in her viral Facebook post which drew flak from netizens.

The singer expressed on her personal Facebook account how hard it was to love the country during this time.

As of writing, the post could no longer be viewed as it may have been removed or its privacy settings were changed.

A week after her “outburst,” Lea maintained that she meant every word she said as an expression of her frustration over the events unfolding in the country.

“I never, NOT EVER, cursed the Philippines,” she issued a clarification in a series of tweets.

She added that to serve the country is one of her greatest honors.

“So, to further clarify, I didn’t say p- i- mo, or p- i- ka. If that was what I meant I would’ve been explicit in my expression,” she said in another tweet.

“My apologies if I hurt your feelings with my choice of words,” she added.

In her next tweets, Lea assured that it was not her intent to desecrate the country.

“If after following this post you still decide to cuss me out, you’re well within your right to do so. I totally understand and get that you’re doing it as tasked to protect the country from anyone that dares to desecrate it. Know that that was not my intent,” she said.

She then thanked her friends and family who had her back during the time her post courted controversy.

After the series of tweets, many Twitter users came to her defense and stressed that she has the right to express her frustrations as well.