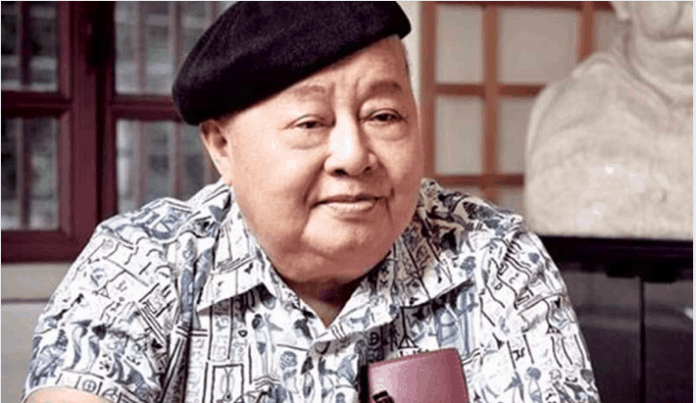 His piece, which was uploaded on his personal Facebook account, expressed how the broadcasting giant’s fall is “good for Philippine democracy.” A writers’ group he himself founded is, however, at odds with his position.

In his now viral post, the 95-year-old prolific writer said the Lopez family, who owns ABS-CBN, is a leading member of the oligarchy.

“God knows what billions the family got from government financing institutions to become a haven for communist fronts and communists, among them the late Renato Constantino,” he claimed.

In his piece uploaded on May 9, he recounted how “Don Eugenio Lopez”, the chairman emeritus of ABS-CBN, bought more than half of an art exhibition in his gallery. “Surely, there was a good side to this oligarch — his patronage of Filipino art, his Filipinoness as illustrated and epitomized in the Lopez gratitude,” he said.

Manong Frankie, as he’s fondly known in the literary industry, highlighted that while he sympathizes with those who have lost their livelihood, he does not mourn the passing of one of the biggest media companies in the country.

“I sympathize with the hundreds who will lose their jobs but I’ll not mourn the passing of ABS-CBN; its demise, I dare say, is even good for Philippine democracy if it also means the dismantling of the Lopez empire,” he said.

At the end of his requiem, he argued that despite entertaining millions, ABS-CBN did not diminish poverty.

“The Filipinos do not really need ABS-CBN. It does not produce goods or food. It has certainly entertained millions but it did not diminish poverty. Again, freedom worked for the rich — but not for the Filipinos,” he ended.

Writers’ group Philippine Center of International PEN, however, released a statement that went against the sentiments of its founder, F. Sionil Jose himself.

The group stated that the silencing of the media giant is an “unjust and deafening blow to freedom of the press and freedom of expression.”

“This action is particularly grave and insensitive in light of the current global pandemic that is threatening the lives of millions of Filipinos, a crucial time when all media channels play a crucial role in delivering critical news and guidance to the public,” it said.

“The closure also immediately ends the livelihood of more than 11,000 Filipino workers and their families, at this time of great economic uncertainty,” the group stressed.

The Philippine PEN further denounced the shutdown as it goes against free expression and democracy. The group also called on the government to withdraw their order and act on their duty to serve Filipinos who are in need of information in these dark times.

On May 5, ABS-CBN was forced to sign off as the National Telecommunications Commission ordered the network to stop operating its free-to-air radio and TV broadcast stations nationwide following the expiration of its 25-year congressional franchise on May 4.

Sionil Jose is best known for The Rosales Saga, a five-novel epic that embodies 100 years of Philippine history and depicts the Philippines’ revolutionary tradition. He is also the country’s most widely translated writer, with his works translated into over 25 foreign languages.