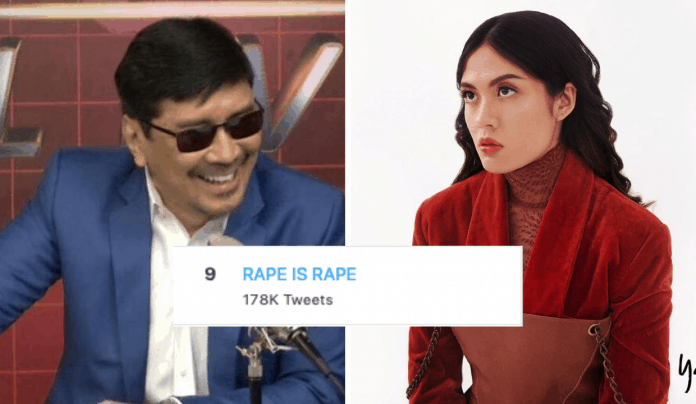 Frankie Pangilinan won the internet’s heart after she called out television and radio personality Ben Tulfo for discrediting her take on rape.

On Twitter, the daughter of veteran singer Sharon Cuneta and Senator Kiko Pangilinan stressed that women should not be told how to dress.

“STOP TEACHING GIRLS HOW TO DRESS?? TEACH PEOPLE NOT TO RAPE,” she said.

Her tweet made its way to the Bitag host who addressed her and other women to be careful with how they dress.

“Hija @kakiep83, a rapist or a juvenile sex offender’s desire to commit a crime will always be there. All they need is an opportunity, when to commit the crime. Sexy ladies, careful with the way you dress up! You are inviting the beast.”

The controversial tweet did not sit right with the 19-year-old and many Pinoy netizens on Twitter. Quick to retaliate, Pangilinan called out Tulfo for his line of thinking.

Tulfo, who remained mum on Twitter after the response, resorted to Facebook to label Pangilinan as a “wannabe smart aleck.”

His post did not go unnoticed. Frankie said Tulfo resorted to Facebook knowing that she is not active on the platform.

“The way he was braver on FB because he knows I’m not on there,” she wrote.

Days after their social media brawl, “Rape is rape” trended on Twitter. The trend was filled with Pinoy Twitter users who stressed that rape is rape regardless of the victim’s clothing.