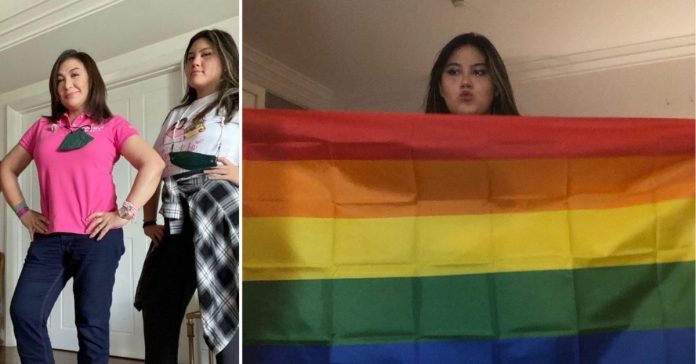 ‘It’s your life, no one else’s’: Sharon Cuneta on daughter Miel coming out as queer

Sharon Cuneta has expressed her love and support for her daughter Miel Pangilinan, who recently came out as part of the queer community.

The veteran singer-actress took time to address those who were “quick to judge” her daughter and the LGBTQ+ community.

“Lots of people who are quick to judge instead of pausing to think for a moment that my daughter, like so many members of the LGBTQ+ Community, did not choose to be queer. She just is. I believe God doesn’t make mistakes.

“So many of the most sincere and most decent people I know are also LGBTQ+ and I love them for all that they are,” she wrote.

Sharon mentioned her 17-year-old daughter will live free and will always be a person with a good heart.

“She is cute in that her crushes on boys especially in K-Pop are genuine. And if she likes girls, that’ll be genuine too. She will certainly be treated no different by us her family and those who truly love her,” she said.

The celebrity mom further said that while she upholds her traditional values, she fully accepts her daughter for who she is.

She ended her post, addressing her daughter: “No big deal. I love you, my Yellie. With all of my heart, and more than life itself. Be strong! It’s your life, no one else’s.

“Don’t give any negative commenters any attention. They don’t matter. We do. And we’ve got your back. Forever and ever.”

Miel’s older sister Frankie also took to social media to encourage her followers to send her little sister some love after she received comments from upset netizens.

The Cuneta-Pangilinans’ youngest daughter announced her gender and sexual identity on June 15 while celebrating Pride month.

READ: Miel Pangilinan receives love from family, friends after coming out as queer