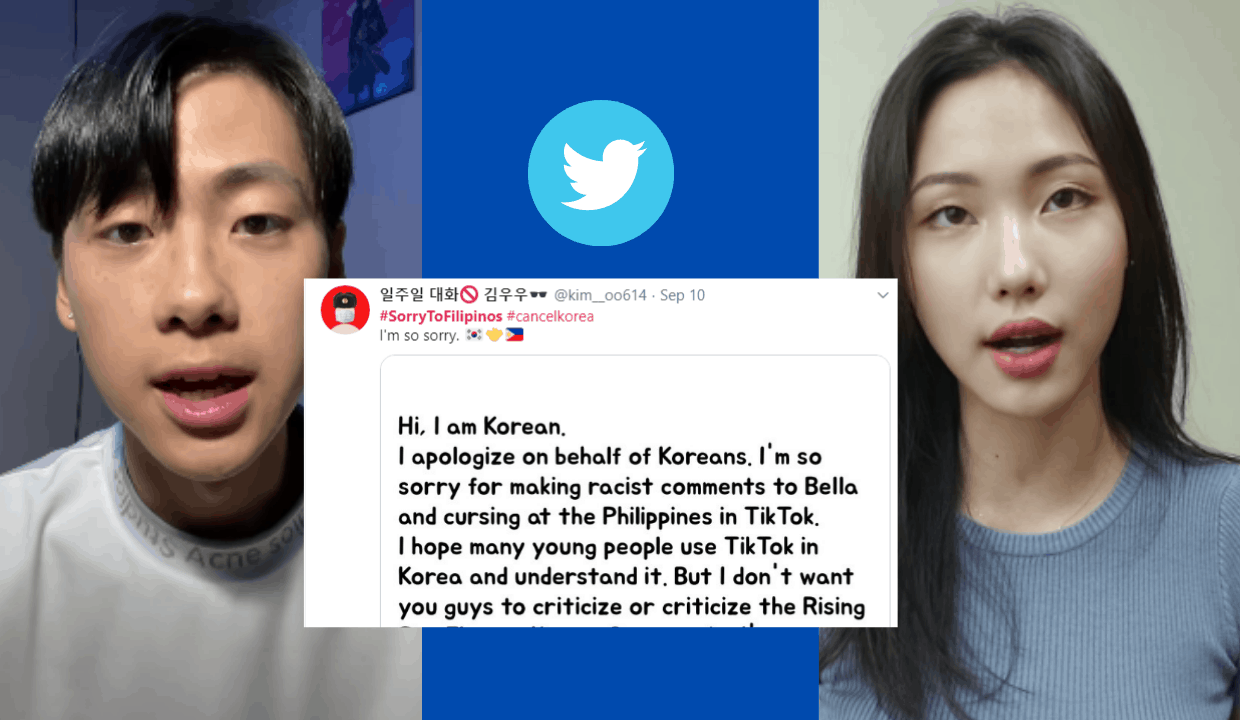 Korean influencers and netizens have reached out and apologized to Filipino netizens following the #CancelKorea trend in the country.

Upon learning of the Korean netizens’ concern, Bella apologized for her tattoo and promised to have it removed.

“I didn’t know the history behind the tattoo and I will educate others about it,” she said.

“Please learn from my mistake,” she told her followers.

Korean netizens, however, allegedly continued to leave harsh comments on Bella’s TikTok and Twitter accounts, including racial slurs against Filipinos in general.

In reaction, Filipino netizens trended the hashtags #CancelKorea and #ApologizeToFilipinos on Twitter as they condemned racial discrimination from Korean Internet users.

The online furor subsequently made headlines and was even picked up by Korean media outlets.

“The incident is raising concern in South Korea that the popularity of Korean entertainment could be hit hard in the Philippines,” said Korea Times, citing a report from the local news agency Yonhap.

Days after the #CancelKorea trend, Korean netizens and influencers apologized for the behavior of fellow Koreans.

Korean netizens made the hashtag #SorryToFilipinos a trending topic in their country amid the racism debate.

South Korean influencers also expressed their apologies on behalf of some “rude Koreans” via their YouTube channels.

Jessica Lee, who lived and studied in the Philippines for nine years, said: “Any form of racial discrimination is unacceptable for me, and pretty sure with many of you guys as well. So, about this and to those people who got offended by these comments of some Korean netizens, I would like to apologize from the bottom of my heart.

“I’m very sorry for you guys. I feel very uncomfortable guys because I also grew up in the Philippines so I would like to apologize on behalf of those rude Korean netizens.”

YouTuber Juhwan Kim also pleaded with everyone to “refrain from generalizing Koreans based on those few comments.”

“I’m truly sorry if you’ve been misunderstood or hurt by some people who criticized in the comments section about the Philippines, their country culture and its people,” he said.

He added, “There are lots of people including me who love the Philippines, their culture and their people, and we’re so thankful that they have contributed to the Korean war, etc.”

Kuya Koreano Ricky Park also pointed out on his YouTube channel that he can somehow relate to how Koreans feel but leaving “racist” comments is unnecessary.

“I’d like to apologize to those Filipinos who were hurt by this issue,” he said.

“The way they bash is totally off-topic. Attacking on this kind of, like, racial discrimination is totally irrelevant. I think they are the ones who (are) uneducated for focusing on something that is totally off topic.”