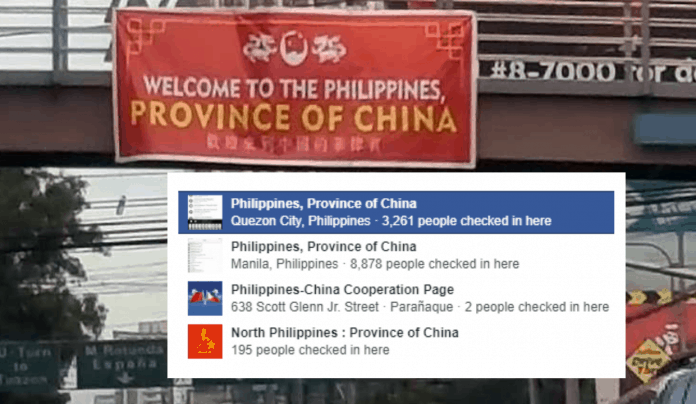 “Philippines is NOT a province of China.”

“Philippines, Province of China” is now available as a geotag on social media platforms, sparking an outcry online.

The country has been indicated as a “province of China” on Facebook and Instagram’s location for check-ins.

As of writing, the said location has now over 8,000 check-ins on Facebook. It’s not clear if these check-ins were done by Filipino or foreign social media users.

Several Pinoy netizens, nevertheless, expressed their frustration over what some called as an insult to the country’s sovereignty.

Others shared ways on how to make “Philippines, Province of China” geotag unavailable on Facebook.

Senator Risa Hontiveros, in a series of tweets, called on the public to “not normalize” and mass report the said geotag.

To recall, red banners bearing the words “Welcome to the Philippines, Province of China” and Chinese characters that were seen hanging from footbridges in Metro Manila sparked outrage online in 2018.

Metro Manila Development Authority (MMDA) took down the banners on the same day.

In a Philstar.com report, Presidential spokesperson Harry Roque said that the “enemies of the government are behind the tarpaulin.”

When asked to comment about the posting of the banners, then Chinese Ambassador to the Philippines Xiao Jinhua said, “Philippines has never been any part of China. No, not now, not ever.”