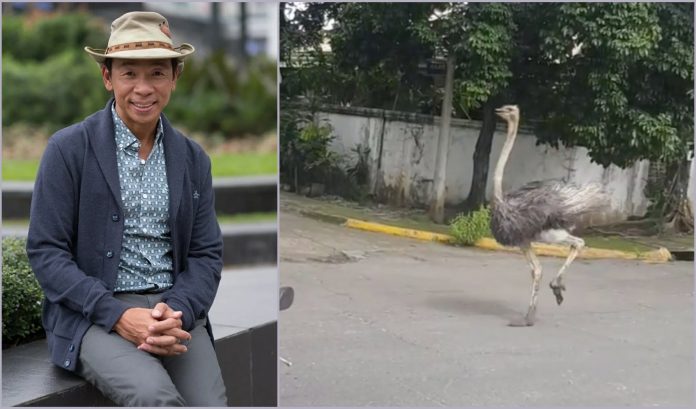 Some netizens turned to Kuya Kim Atienza for trivia on Tuesday, as the internet was losing it over the bizarre sight of an ostrich on the run in a subdivision in Quezon City.

But first, a disclaimer. Kuya Kim, who himself has a mini “animal kingdom” in his home, jokingly denied that the spotted ostrich — or rather, ostriches, as there were actually two — as his.

Kuya Kim readily dispensed his first trivia of the day about the ostrich, otherwise known as the world’s largest living bird.

Another asked for the Tagalog translation for the ostrich. “Ostrits. My lola who spoke Spanish called them abestrus,” he added.

Another netizen, on the other hand, wondered how one could tell if an ostrich was male or female.

“Males are shiny black and a bit bigger while females are dull brown to camouflage them when laying eggs,” he said, before confirming that the running bird was a she.

On Instagram, ABS-CBN’s resident weatherman couldn’t help but deliver a hugot line as well, after someone jokingly asked if the ostrich had a “quarantine pass”. After all, the giant bird went out of its home on the first day Metro Manila reverted its status to modified enhanced community quarantine or MECQ.

Scenes of the runaway bird sprinting down the street and past onlookers, and then getting blocked from exiting the village gate won the internet, drawing shocked reactions, major LOLs and memes from the public, including celebs.

For hours, the words Ostrich and Jumangi — as the incident reminded of the Hollywood film series of the same title — landed among the top Twitter trends in the country.

According to The STAR, the ostriches have since found their way home to the owner, who resides in the same village where these giant birds were first seen.

‘Is someone playing Jumanji?’: Netizens react to two ostriches running...