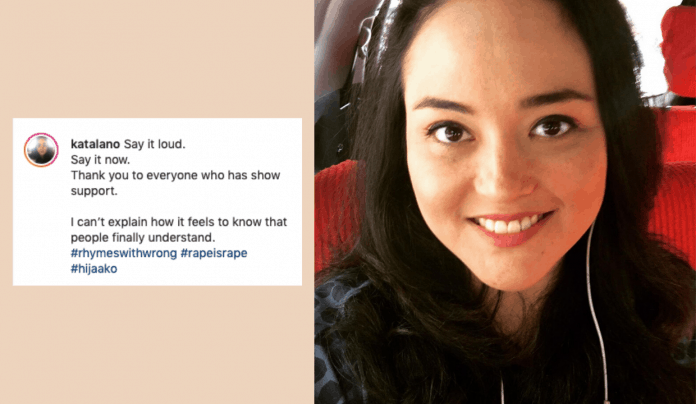 After Frankie Pangilinan called out broadcaster Ben Tulfo for discrediting her stand on rape, women rallied behind the 19-year-old to prove that victims of sexual assault are not to blame for the actions of others.

On Sunday, #HijaAko trended on Twitter as women came forward with their own experiences of sexual assault.

Tulfo repeatedly called Pangilinan “hija” while explaining that women should be careful of how they dress up. The latter, however, stressed that being called “hija” will not belittle her points.

Former celebrity Kat Alano came forward with her own experience and spoke out against victim-blaming. On Twitter, she said that she was wearing a shirt and jeans when a “still famous celebrity” allegedly drugged and raped her.

“When I was raped by #rhymeswithwrong still famous celebrity who had smear campaigns to destroy my career & raped many more, I was wearing a Tshirt and jeans. He drugged me too, so trying to take my jeans off was difficult for him. Hard to rape an unconscious person in jean. #HijaAko,” she wrote.

In another tweet, the former TV host stressed that she is standing by her truth.

“And for all those who bashed me and enjoyed my downfall, I still stand by my truth. That man is a serial rapist. And #RapeisRape #HijaAko,” she said.

Moments after her controversial tweet, Twitter users were quick to assure her that they stand with her.

On June 17, Alano thanked those who supported her after she spoke on her past experience.

“Thank you to everyone who has show support. I can’t tell you how much it means that people finally understand what happened,” she said.

If you or anyone you know is a victim of sexual harassment and any form of violence against women, here are numbers you can call: