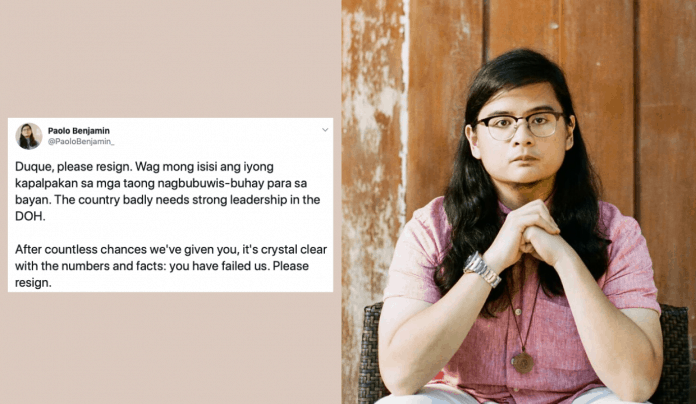 The artist asked Duque not to pin his mistakes on his subordinates.

“Duque, please resign. Wag mong isisi ang iyong kapalpakan sa mga taong nagbubuwis-buhay para sa bayan. The country badly needs strong leadership in the DOH. After countless chances we’ve given you, it’s crystal clear with the numbers and facts: you have failed us. Please resign,” he said in a tweet.

In another tweet, Guico said the country trusted the DOH secretary to lead the country during the COVID-19 crisis.

His tweets came after Duque expressed his disappointment over his subordinates for the delay in the release of cash assistance for health workers who got infected by COVID-19.

During the Inter-Agency Task Force on Emerging Infectious Disease meeting aired Friday morning, President Duterte asked for updates on the distribution of compensation to these healthcare workers, as stipulated in Republic Act 11469 or the Bayanihan to Heal as One Act.

Duque later on owned up to the responsibility for the delay in the financial aid disbursement. “While I expressed disappointment towards some members of my team, I acknowledge that this is still responsibility as SOH,” he said in a tweet Friday afternoon.

However, the Ben&Ben singer wasn’t the only one to call on Duque to step down from his position.

In a Philstar.com report, an umbrella group of private hospitals asked President Duterte to replace Duque for his leadership of the government’s response to the coronavirus disease.