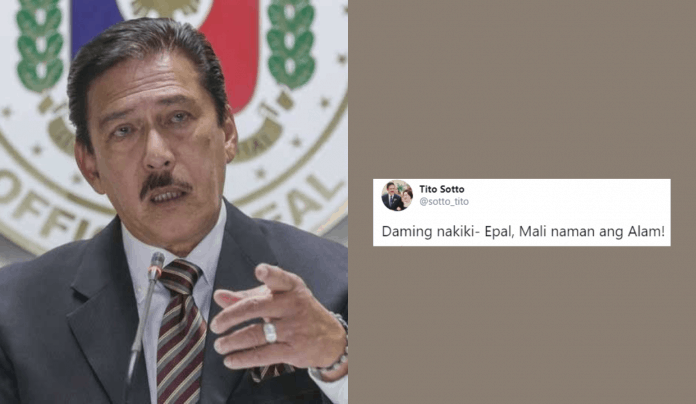 Senate President Vicente “Tito” Sotto III took a jab at critics of the controversial anti-terrorism bill, saying they are misinformed about the proposed measure.

“Daming nakiki-Epal. Mali naman ang alam,” Sotto chided those who have vocally opposed the bill in a tweet on Wednesday.

Despite the online backlash, the House of Representatives on Wednesday approved the proposed “Anti-Terrorism Act of 2020” or House Bill 6875 on its third and final reading. It now only needs the signature of President Duterte to become a law.

President Duterte on Monday certified the bill as “urgent” as the passage is seen to “address the urgent need to strengthen the law on anti-terrorism in order to inadequately and effectively contain the menace of terrorist acts for the preservation of national security and the promotion of general welfare.”

The bill, which amends the country’s existing anti-terrorism law or the Human Security Act of 2007, seeks to impose a harsher punishment on terrorism defined as “acts inciting fear and seriously destabilizing structures in the country.”

Critics fear that the law will be used to stifle dissent and go after those who are critical of the government.

In an ABS-CBN report, however, Sotto said that critics just don’t understand what the proposed bill is all about.

Sotto added that terrorists and its supporters are the only ones who should be frightened of the proposed measure, ensuring that it has all its safeguards.

The senator also shared an infographic in his official Facebook account, telling the public to be aware of false information.

The hashtag #JUNKTERRORBILLNOW became a top trending topic on Twitter nationwide with netizens expressing their concerns and frustration on the immediate passage of the bill.

Netizens, human rights advocates and even celebrities used their platform to speak up against the controversial bill with the said hashtag.