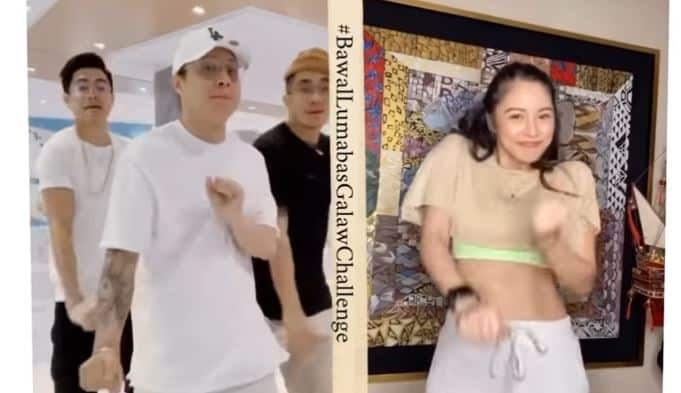 DJ Loonyo has teamed up with Kim Chiu for the official choreography of the actress’ (in)famous Bawal Lumabas song.

The newest choreo dubbed the Bawal Lumabas Galaw Challenge premiered on Kim’s YouTube vlog on Monday, the same day the song was made available on digital platforms.

She added, “Special thank you to DJ Loonyo for doing the OG steps of #BawalLumabasGalawChallenge. Salamat jud kaayo! More power! All the best!”

In the vlog, Kim took the chance to thank DJ Loonyo for his kind words and for his statement that he didn’t want to join the “Bawal Lumabas hype” out of respect for the Kapamilya actress.

“And I believe, if I’m gonna do it, hindi ko siya gagawin, not unless Kim Chiu will talk to me or personally message me na okay na gawan,” he said.

In Kim’s vlog, DJ Loonyo continued to come to the defense of the actress.

He also revealed the major reason why he decided to take on the dance challenge.

“Kasi ako personally nung nag-story ka, na parang nag-invite ka na you want an OG step, kumbaga para sa akin, I want to do it kasi I want to be a part of your movement na that’s really inspiring. Na from that point in your life or situation in life, na ako talagang nakakaintindi ako nun na ang hirap ibangon nun,” he said.

“Hindi ko gagawan yung challenge because of the music or dahil ba hype siya, hindi. Dahil I want to join the movement, because it’s really inspiring for people,” he added.

DJ Loonyo also released a dance tutorial of the Bawal Lumabas song on his Youtube channel.