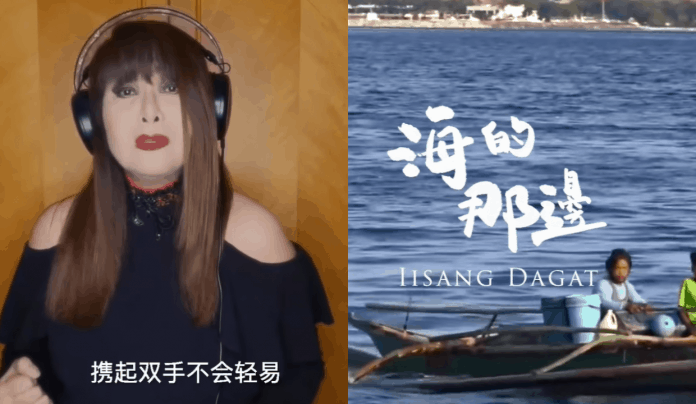 Veteran singer and Camarines Sur Vice Governor Imelda Papin received flak for taking part in the Chinese Embassy’s COVID-19 tribute song titled Iisang Dagat, which is dedicated to “everyone who has contributed to the fight against the epidemic” from both China and the Philippines.

The lyrics of the “mutual support” song were written by Chinese Ambassador to the Philippines H.E. Huang Xilian. It was mostly sung in Mandarin while the remaining parts were in Filipino.

Alongside Papin, the song was also performed by Chinese Diplomat Xia Wenxin from the Embassy, Filipino-Chinese Singer Jhonvid Bangayan and Chinese actor Yubin.

“Just as the lyric goes, as friendly neighbors across the sea, China and the Philippines will continue to join hands and make every effort to overcome the COVID-19 at the earliest,” wrote the Chinese Embassy Manila in its Facebook page.

China has previously donated testing kits, face masks and PPEs to the country.

Last week, medical experts from China arrived in the Philippines to share their learnings and help the country in handling the coronavirus crisis.

The music video released on April 23, Thursday, however, has received more dislikes than likes on ChinaTV’s YouTube channel.

On Twitter, netizens aired their dismay over Papin singing parts in what they perceive as China’s subtle move to claim ownership over the West Philippine Sea.

President Duterte has had said that he preferred to maintain friendly negotiations with China regarding the ongoing territorial disputes.

Nevertheless, the country recently filed two diplomatic protests against China for pointing a radar gun at a Philippine Navy ship and declaring a Philippine territory as part of Hainan province.

Papin has not responded to the comments, but shared the music video on her Facebook account on Saturday.