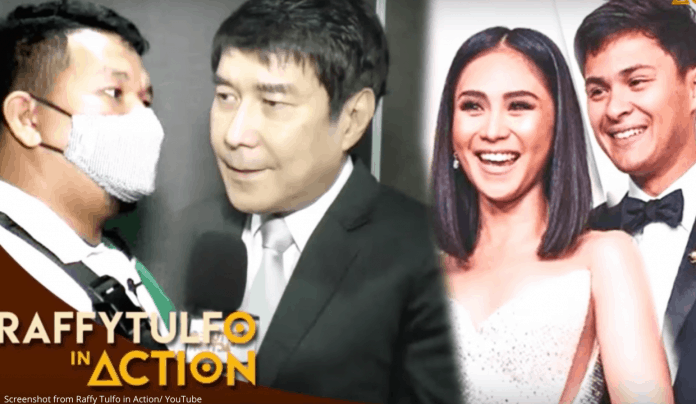 Jerry Tamara, the close-in security of Sarah Geronimo-Guidicelli, will not push through with his plan to file a complaint against Matteo Guidicelli after reaching a settlement agreement with Viva management.

Sarah and Matteo are both managed by Viva Entertainment Inc.

In a video uploaded in news anchor Raffy Tulfo’s program Raffy Tulfo in Action on YouTube, he and his team revealed what went down with Tamara’s settlement with Viva’s big boss Vic del Rosario.

It can be recalled that Tamara complained on live TV through Tulfo’s Aksyon sa Tanghali and disclosed the punching incident where he alleged that Matteo hit him in the throat during Guidicellis’ supposedly secret wedding last February 20.

Last February 26, Tamara went to the Viva office with Tulfo and had a closed-door one-on-one meeting with boss Vic del Rosario to settle the issue.

He was also supposed to meet Sarah and Matteo but the Kapamilya stars were unable to attend due to their tight schedules.

During their one-on-one talk, Tamara asked for a P1.5M settlement for the “damages” that Matteo caused him, but boss Vic had a counter-offer of P100,000.

Tamara refused the offer, saying he needed the money for a fresh start.

He then told Tulfo that he would give it some thought, but also considered to personally meet Sarah and Matteo rather than receiving the money. He also wants Matteo to apologize to him.

Two days after, February 28, Tulfo reported that Tamara had been ignoring their calls, so they tried reaching out to Viva instead to ask if the meetup of both camps would still be possible.

Viva then disclosed that Tamara had already accepted a P200,000 settlement offer from the talent management agency.

On February 29, Tulfo received a message from Tamara saying his thanks to the program and confirming that he already did settle the issue with Viva on February 27.