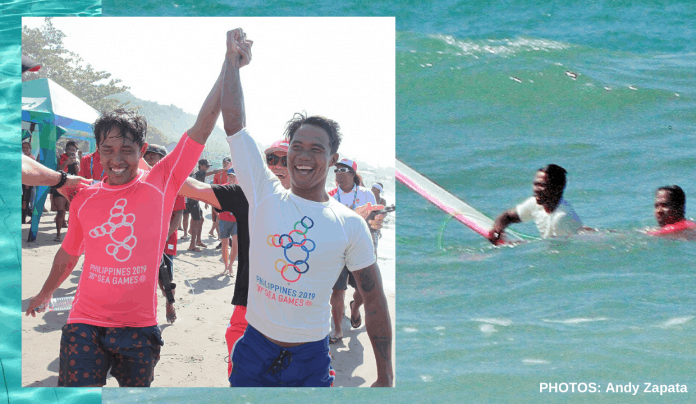 Life is more valuable than gold. This can be attested by the heroic act of a Filipino surfer who opted to abandon his race for gold in the men’s longboard open competition for surfing in the 2019 Southeast Asian (SEA) Games so he could rescue a rival who had figured in an accident.

Local surfer Roger Casugay didn’t think twice about saving Indonesia’s Arip Nurhidayat who broke his leash and was swept away by the huge waves at the competition venue at Monaliza Point in San Juan, La Union, according to a Facebook post by a certain Jefferson Ganuelas.

“Indonesian longboard sensation @mencosss broke his leash and swept away and being pounded by triple overhead bomb waves at Monaliza Point. Local surfer @roger_casugay rescued him not minding the ongoing race for gold medal,” he wrote.

The inspiring display of sportsmanship was also shared by the official SEA Games 2019 Facebook page, confirming that Casugay sacrificed his own chance at winning because he went on to assist the competitor in distress.

“Sportsmanship at its finest! The first 10-point ride of the South East Asian Games posted by Roger Casugay & Mencos Cosomen!” it said in a Facebook post.

After Casugay came to Nurhidayat’s rescue, both returned to the shore sharing a surfboard.

“During their heat, Mencos broke his leash while paddling out. Roger, being the closest to him, came to his rescue and paddled back to the shore tandem surfing the beach break,” the UPSA post further said.

The competition has been put on hold until further notice, but in the eyes of netizens, Casugay is already a winner.

“HUMAN LIFE OVER THE GOLD. It is the best example of being human, of humanity. THIS IS THE ULTIMATE GOAL OF ATHLETIC MEETS. FOR ALL OF US TO CELEBRATE BEING HUMAN BEINGS AND DISPLAYING OUR BEST…CHARACTER INCLUDED!” a Facebook user said.

“That’s the essence of #WeWinAsOne! God bless us all!” another one said.

A netizen also shared another instance where Roger showed he has a heart of gold.

“Roger has a heart of gold. He rescued our dog with broken back legs last month, brought him to the vet in Tacloban three hours away and paid for his medical bills. Sadly the dog didn’t make it through and passed away ?. The world needs more people like you Roger ?? grateful,” the commenter said.

After the incident, the crowd broke into cheers, and the two athletes were all smiles and held each other’s hands up like two champions. It’s #WeWinAsOne after all.