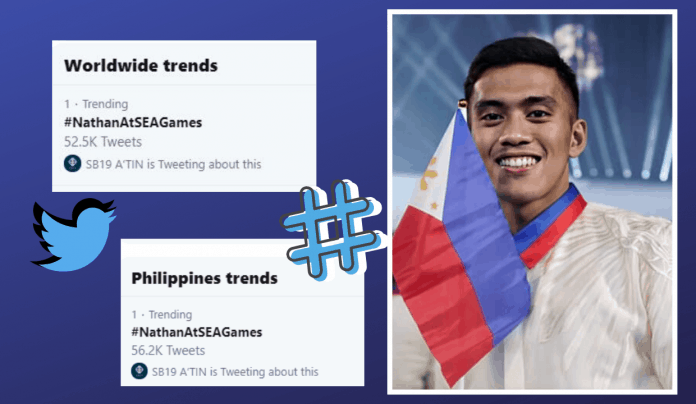 Fans of rising Filipino boy group SB19 surely know how to support each other, as they showed love for their fellow A’TIN (SB19’s official fandom name).

Nathaniel Perez, who had competed and claimed a bronze medal at the 30th Southeast Asian Games’ fencing event, happens to be a big fan of SB19, the first all-Pinoy boy group that trained under a Korean entertainment company.

Nathan is also a three-time UAAP MVP and the team captain of the Philippine Fencing Team.

With all their love and might, ATINs showered Nathan with good luck and congratulatory messages, making #NathanAtSEAGames a top trending topic, not just nationwide but also worldwide.

In one of his tweets on Tuesday before his competition, he thanked SB19 for inspiring him and keeping him motivated.

“I just wanna say that you have become really one of my biggest inspirations and motivations. You really are angels in disguise,” he said.

Nathan also thanked his fellow ATINs for the support, after hearing the news that he was trending on Twitter.

ATINs have been recently nominated for the Fandom of the Year Award by a local lifestyle and entertainment magazine while SB19 as the Group Performer of the Year.

Trained like Kpop idols, SB19 has been making waves in the music industry recently.

Made up of Justin, Sejun, Ken, Josh and Stell, the group previously gained worldwide attention after earning the sixth spot in Billboard’s Next Big Sound Chart. They even won as the Most Favorite POP Boy Group of the Year at the PPOP Awards for Young Artist.

Congratulations Nathan, you surely have made the country and of course, your ATIN fam proud!

Pinoy surfer sets aside battle for gold to rescue Indonesian...