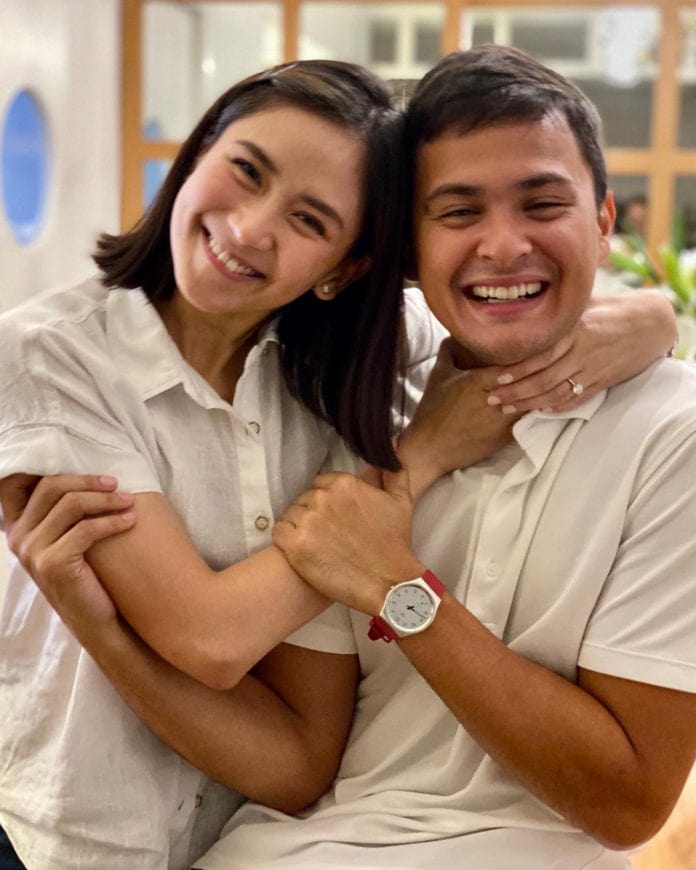 Manay Lolit Solis is one of the people who are happy that Matteo Guidicelli and Sarah Geronimo are finally tying the knot.

She’s all for the wedding despite the fact that up to know she believes that Gerald Anderson is the right guy for Sarah.

Long, long ago, the talk was that Sarah and Gerald were once an item but that they broke up.

Kisses signed the contract with Triple A yesterday at the Sequioa Hotel with Triple A bosses Mike Tuviera and Rams David in attendance.

Asked what prompted her to make the move, Kisses said she “wanted to explore more opportunities pero at the end of the day, I’m always thankful for everything that I achieved through the help of PBB (Pinoy Big Brother) where I started.”

She let on that it was through Marian Rivera that she met Rams David. “Na-meet ko po si tito Rams through Ate Marian before. Nagkita po kami sa Guillermo Awards and then, nagkita rin po kami sa fashion show. And ‘yun. I just felt that he genuinely cares for me and naisipan ko po na maganda po ‘yung APT.”

Rams corroborated what Kisses said. “We made sure na maayos ang pagpapaalam nila sa ABS-CBN because we respect their contract and their talents and the management. Importante ‘yung respeto sa samahan lalo na sa industry,” he said.

Direk Mike announced that Kisses will do three films for APT Entertainment in 2020 — a romantic-comedy, a family ensemble drama and a heavy drama.

Rams said the bosses at GMA 7 want to talk to Kisses about TV projects.

Speaking of Marian “Go Local” is one of the advocacies of Marian, which means she’ll be patronizing local brands, down to her clothing and shoes.

To make her point, she wore a local brand dress during the renewal of her contract with Reverie by Beautéderm Home, which she endorses.

Marian said her advocacy began when she became an endorser of Kultura.

Even her daughters Zia and Ziggy are going local, Marian said.

She’s happy re-signing with Beautéderm, which started making decorative candles and has plans to branch out to other lighting products.

Beautéderm president and CEO Rhea Anicoche-Tan said she is thankful to Marian accepting the offer to be the company’s endorser.

Salve Asis
Salve Asis is an entertainment columnist and editor of Pilipino Star Ngayon and Pang Masa. A member of the Cinema Evaluation Board, she’s one of the founders and officers of the Society of Philippine Entertainment Editors (SPEED).