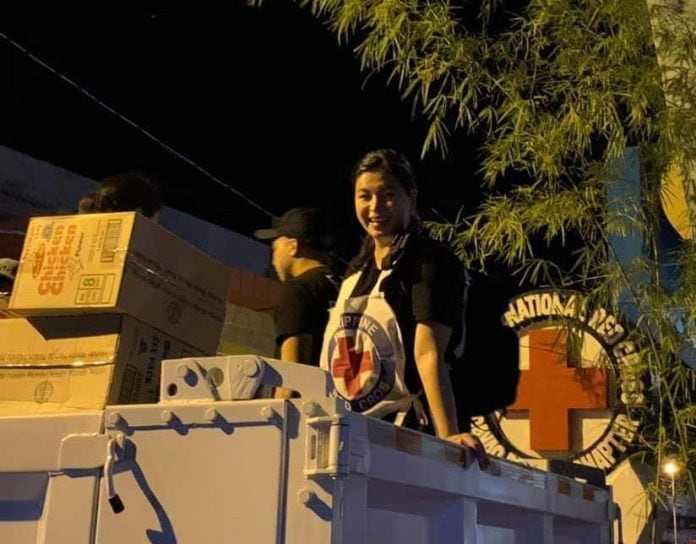 “Angel indeed: Ms. Angel Locsin, together with her fiancé, Neil Arce, personally went to our Davao del Sur Chapter to donate and volunteer in the distribution of relief goods and hygiene kits for the quake-hit families,” Philippine Red Cross chairman Sen. Dick Gordon wrote on his official Facebook page.

“Thank you, Angel, for trusting the Philippine Red Cross,” he said.

Earlier, it was reported that the 34-year-old actress was spotted buying a truckload of relief goods in Davao City and distributing aid to victims in Digos, Davao Del Sur.

Netizens were left amazed by Angel’s display of concern for residents of Davao Del Sur, one of the most badly-affected areas after central Mindanao was struck by two consecutive, powerful earthquakes just this week.

But Angel has long used her celebrity power to raise awareness on where help is needed or initiate relief efforts herself.

Here’s a look back on Angel in action as volunteer and humanitarian through the years.

According to the Philippine Red Cross (PRC), Angel decided to “help save lives” and become a blood donor in 2009.

Angel would be a regular face at the PRC headquarters in Mandaluyong and would encourage her followers and fans to also donate blood.

In one PRC video, she advised volunteers to have at least eight hours of sleep, no intake of alcohol, medicines and drugs, as well as not pregnant and underweight. Don’t do strenuous activities like driving after, she added.

Back in 2013, in the devastating aftermath of supertyphoon Yolanda, Angel Locsin was spotted helping in the packing of relief goods for victims and orienting Red Cross volunteers, according to an ABS-CBN News report.

At that time, she also auctioned off her Chevrolet Chevelle vintage car, with a starting bid of P11M, to raise more funds for the typhoon victims in Eastern Visayas, Philippine Star said.

In 2017, amidst the Marawi siege crisis, she still found time to donate blood at the PRC Iligan Chapter.

Angel was then one of the volunteers looking to boost the morale of Marawi evacuees in Iligan City, Lanao del Sur, News5 reported.

“None of us can be like Darna and fly to rescue people. But we can be like Ms. Angel Locsin and care for those in need like the Marawi evacuees,” said then Social Welfare Sec. Judy Taguiwalo.

Meanwhile, just last year, Angel was already close to becoming a blood galloner. The Blood Galloners Club is a group of individuals who had “donated more than 450 cc of blood in all PRC’s facilitated blood-letting activities”.

Angel has also been sharing her advocacy with her celebrity friends.

Yesterday, November 1, Angel Locsin made headlines again as photos and videos of the actress buying and distributing relief goods sprouted on social media.

The actress may have done much for the quake-affected residents, but she still didn’t forget to highlight the work of the volunteers at the PRC Davao Del Sur chapter.

In a video posted by Digos City resident Sybelle Degra, Angel was seen giving a sweet message to the residents and volunteers, telling them to take care and thanking them for their help.