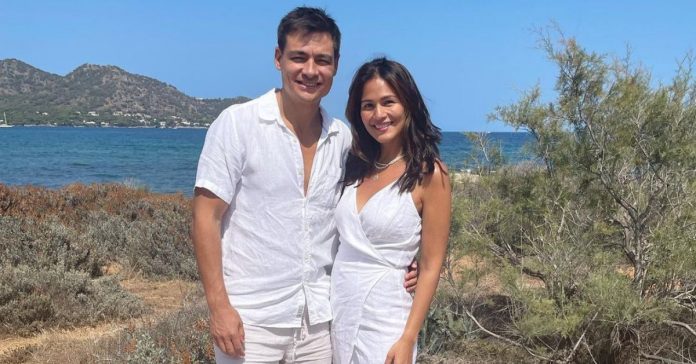 It seems Iza Calzado’s first pregnancy at 40 was an unexpected blessing!

The actress revealed that she and her husband Ben Wintle actually agreed not to have a baby this year, she said in an interview with Bianca Gonzalez.

Iza explained she wanted to focus on her career, especially after her stint for the Darna television series, she joked she could have been an action star at the age of 40.

“It was agreed upon na parang it’s not gonna be this year but you know what, Bianca, God had other plans and God’s plans are always far greater than what my eyes can see, what my mind and my heart can even conceive. Apparently, my womb conceived din,” she said.

The Darna star said that she and her husband immediately knew she was pregnant when they found out she had missed her period.

She added, “We were not trying. This was unplanned but of course, very highly appreciated, diba?”

Now finished with her first trimester, the soon-to-be mom expressed how grateful she is that she is still able to do the things she love such as working out.

Iza also opened up on her struggle with accepting her weight gain after her gruelling months of training as Darna’s mother in the series.

While she continues to exercise during her pregnancy, Iza assured she is mindful of what her body can and cannot do.

It was just recently when Iza revealed her pregnancy with a glowing snap of her and her baby bump.

She made the announcement just days after her 40th birthday.

Iza Calzado thanks husband Ben Wintle for showing her the...

Iza Calzado looks back on the day she lost her...