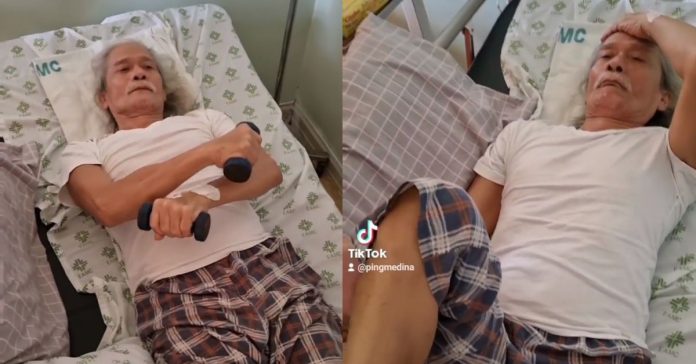 Seasoned actor Pen Medina has been receiving physical therapy as part of his treatment for a spine disorder.

The 71-year-old actor’s son, Ping Medina, took to social media on Sunday, July 17, to echo their family’s call for help and to share video clips of his father doing light physical exercises while lying on a hospital bed.

In the video, Pen was seen being helped and coached by healthcare workers in lifting small weights, shift positions, and make light stretches.

A day prior to the video’s posting, the veteran actor’s family had previously disclosed on his Instagram page that Pen has been hospitalized for almost three weeks due to degenerative disc disease and has been unable to sit or stand up because of his condition.

His family has since appealed for prayers and financial help as the actor is set to undergo a major spine surgery on Tuesday, July 19.

Family, friends, and fellow actors have also since joined the call for donations and have extended well-wishes for the veteran actor.

How timely! This upcoming ABS-CBN teleserye hints at a health...