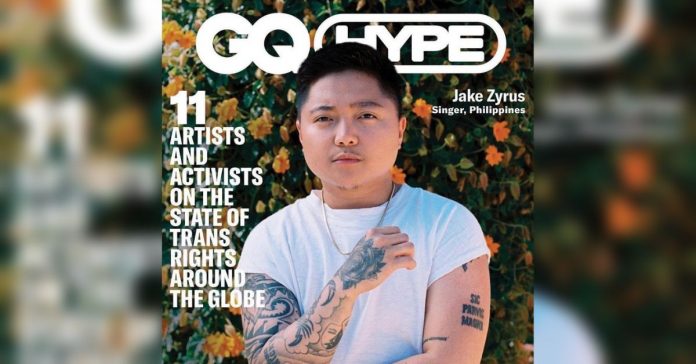 Jake Zyrus brimmed with much pride as he shared his journey of transitioning to a transgender man with US-based magazine GQ.

Just as Pride Month came to a close, the Filipino pop singer took to Instagram to greet fellow members of the LGBTQIA+ community and share with fans his story in GQ, where he was featured as the first solo Asian artist to have a Top 10 album on the Billboard charts.

In his interview with GQ, the 30-year-old singer bared how his life was like being in the closet and how he grappled with his identity and sexuality while growing up under the public eye.

He admitted that such an experience made it difficult for him to open up.

“I think with everything that happened to me, childhood trauma and all that, sometimes it really still gets to my head,” he added.

“Sometimes, even your feelings get dragged into the closet because they were with you all along — how you’re really feeling, your freedom, everything,” the pop singer also said.

Jake also lamented on how “Filipinos just tolerate” him and his brother and sisters of the LGBTQIA+ community rather than be accepting of them, as he shared how the Philippines “will always be” his home despite feeling more accepted in the United States.

While his transition to a transgender man, according to the same interview with GQ, also meant adjustments to his career as a singer, Jake now looks on to building back his “pop side” and to coming back onstage with a US tour, having found the way and courage to who he is — proudly.

The singer said that he has been getting his confidence back, growing comfortable and playing around with his new vocal range, and even rediscovering dance.

In his Instagram post, Jake thanked GQ magazine, writer Raymond Ang, and photographer Martin Diegor for the chance to tell his story, express himself, and for his real self to be captured in the feature.

He also expressed his love and gratitude towards David Foster who has been his mentor and godfather.

The singer then addressed his fans and fellow members of the LGBTQIA+ community.

“To LGBTQIA+ community, this one’s for all of you. Mabuhay tayong lahat,” he added.

Jake first came out as a transgender man via Twitter back in 2017.

In February this year, the singer also took to Facebook to share a shirtless selfie, embracing his body’s transition.

READ: ‘This is me’: Jake Zyrus embraces body transformation in topless photo