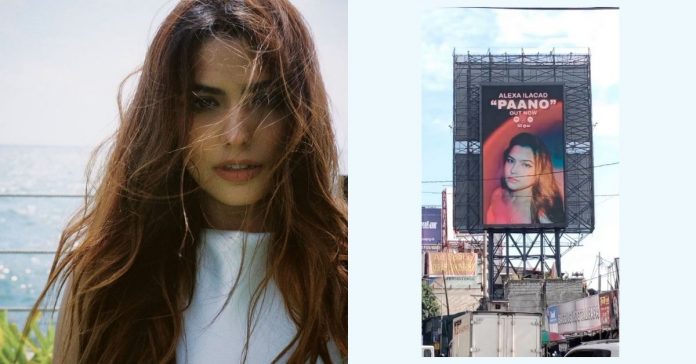 Alexa Ilacad is one lucky star as her fans go above and beyond with their surprises for her.

On Friday, the singer-actress shared how speechless she was after finding out that her and Eian Rances’ fans have set up a billboard in Pasig city to mark the release of her new song.

AlEian fans on Twitter shared a clip of their billboard with their congratulatory message for their idol. “Congratulations Alexa! We are so proud of you,” they wrote.

“Oh my gosh. YOU GUYS!! I’m speechless.. Thank you! What have I done to deserve this,” she responded to her fans.

In another tweet, she thanked her fans for celebrating the release of her new song, Paano, with her.

The billboard set up at C5 Bagong Ilog, Pasig was the talk of the internet as it takes on the 9th spot of Twitter Philippines’ top trending list.

Alexa Ilacad grateful for ‘the good, the bad and the...

Alexa Ilacad looks back on her KathNiel fangirl days