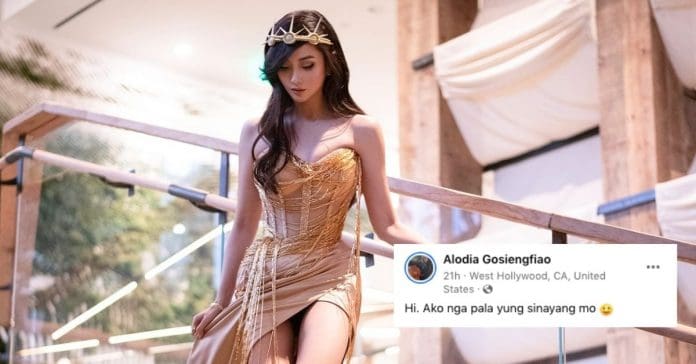 Alodia Gosiengfiao caught netizens’ eyes once again after she shared a stunning snap of her along with an interesting caption.

On the social media post she uploaded on her Facebook page yesterday, she donned a gold gown and head dress for a red carpet from just a few months back.

The gaming video creator’s already controversial post was made even more interesting as she commented: “Tag ko na ba?” for her fans.

Under the comments section, the 33-year-old’s fans did the work for her as they tagged her ex-boyfriend Wil Dasovich on the post.

It was in November of last year when Alodia confirmed that she and Wil have called it quits already.

“To those asking, wala na kame. It’s been a while. We tried to work things out many times but some things are not meant to be. I hope you respect our privacy during this time in our lives,” she announced on a Facebook post.

READ: Alodia Gosiengfiao on breakup with Wil Dasovich: ‘Some things are not meant to be’

Wil Dasovich speaks about ‘moving forward’ amid breakup with Alodia...

Alodia Gosiengfiao on breakup with Wil Dasovich: ‘Some things are...