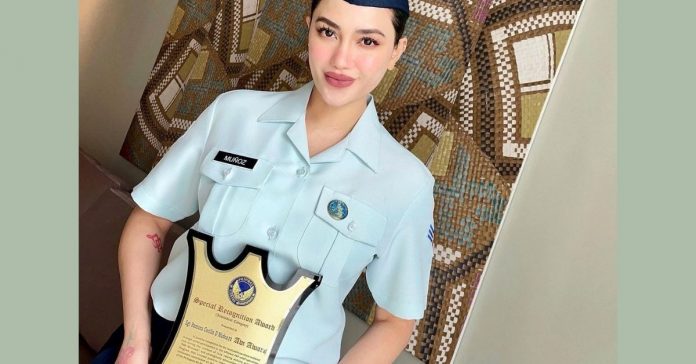 Arci Muñoz took to Instagram to share that she has been recognized by the Philippine Air Force (PAF) for her active participation in their different relief operations.

The PAF reservist shared how blessed she is to be able to serve under the service branch of the Armed Forces of the Philippines.

“There is no limit to what we, as women, can accomplish. To the @philippine_air_force thank you so much for this recognition. Truly I am blessed and it is an honor to serve,” she wrote in the caption.

In the plaque she received, she was acknowledged for her active participation in their relief operations and for “strategically advocating PAF Reservists Program that created positive impact in our society which immensely contributed on the overall mission accomplished of the Philippine Air Force.”

It was reported that the 32-year-old will be gunning for the position of Cainta councilor, under the slate of former basketball player Alvin Patrimonio who will be running for mayor in Cainta.