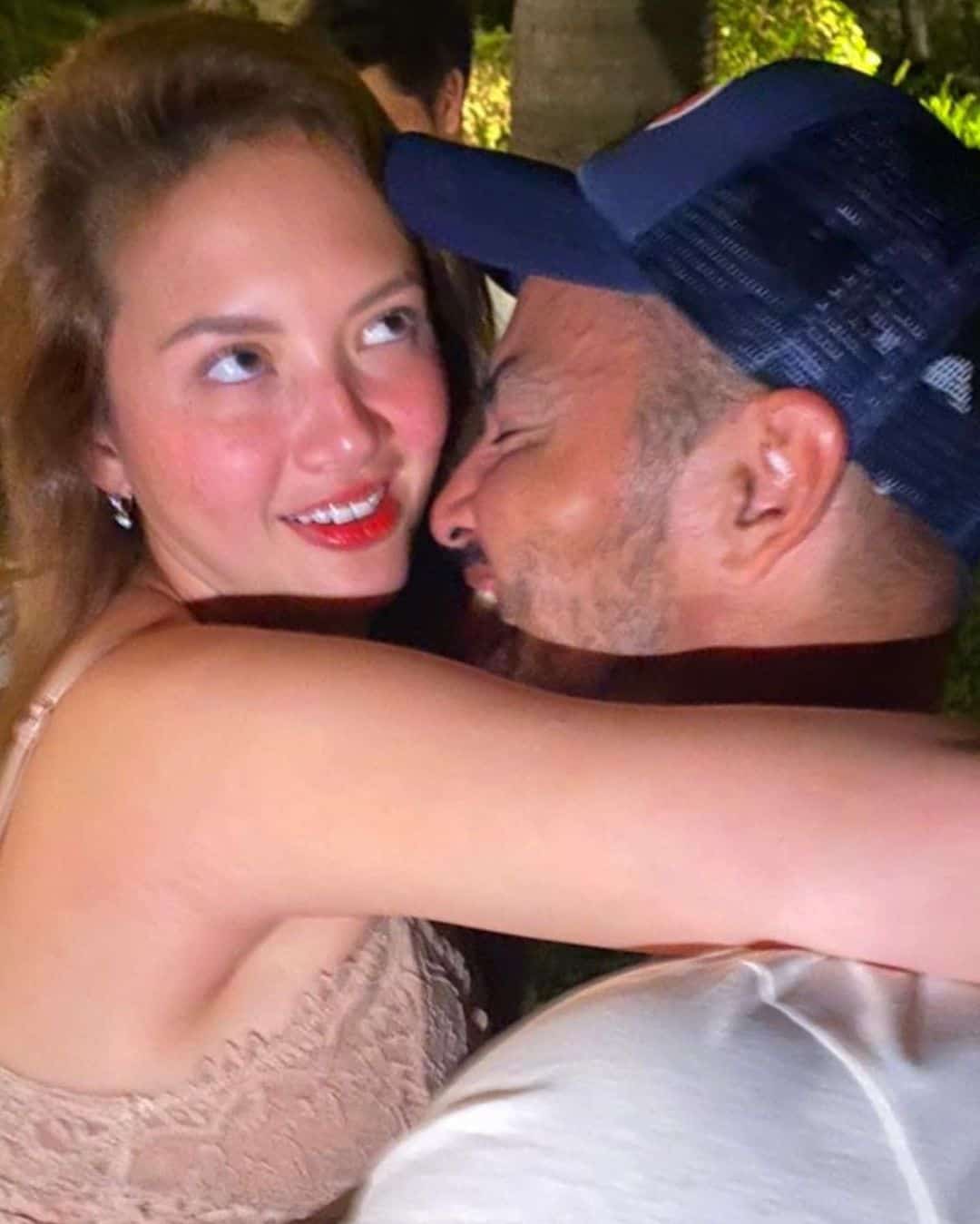 Derek Ramsay and Ellen Adarna went into more details about their relationship in a “laglagan” interview that coincided with their first monthsary.

During the interview on Monster RX93.1 Thursday (March 4), Derek, 44, and Ellen, 32, shared the funny and even awkward stuff they experienced so far in their romance. They revealed that they officially became a couple on February 4.

One question during the interview was about surprising things they discovered about each other that the public doesn’t know.

Derek said, “I think a lot of people know this, but yeah Ellen is super smart. Super! She has some amazing views on life which I’m actually trying to apply to my life.”

“At 44 ha! Hahaha!” Ellen said in reaction that got her boyfriend distracted but led to a playful banter.

Derek, turning serious, continued: “Yeah! And she looks like she enjoys life and she really does. But the most amazing part is alam mo naman how people can judge because she just likes to be that way, and a lot of people take it the wrong way.”

He then praised his girlfriend for being a “super mom” to her two-year-old son Elias.

“And I’ve read things, how can she be like that, she’s a mother…. Guys, to those people, holy sh*t, this girl is up even if she gets drunk the night before, she’s there for her son. She takes care of her responsibilities. 5 a.m. or 5:30 a.m, gising na yan to take care of her son. So I really, really, really like that about Ellen and how she’s a super mom.”

For Ellen’s part, she got real candid in sharing her first impression of Derek, saying that she thought he was a “f**kboi pero hindi pala.”

In response, Derek went on to ask the hosts Rico Robles and Karla Aguas if they wanted to know the story of their first kiss, which he described as “the encounter with the teeth.”

Asked what happened, an amused Derek began, “Di ba first kiss — this can really set the tone, make or break? Alam mo you’re supposed to kiss with your lips. But I had a very good encounter with her teeth.”

“How? How did I kiss you?” Ellen reacted.

Derek said, “It was still a kiss. It was still our first kiss,” then tried to mimic the kiss he’d been given by showing off his teeth.

The actor continued his story. “So, I dropped her off to her house and she goes in for the kiss, siya pa ha. Bam! And then she just gets out, walks out of the car, ‘bye!’ and leaves. And I was seriously sitting there….”

Ellen interrupted by pointing out that it was a simple smack and nothing more. “It was just teeth action,” Ellen quipped.

But for Derek that left him confused. “And then I said, oh God, parang lost ako. Did that just actually happen? I was dazed and confused.”

Asked if they got awkward when they saw each other again the next day, Derek admitted he couldn’t bring up with her what happened the day before.

“Parang holy cow, does she know? Maybe that was her A-game already. I don’t wanna hurt her feelings, I was in shock.”

But Ellen explained why the funny and awkward moment happened.

“No, because I really wanted to kiss him but I didn’t know how to kiss him. So, okay fine, I’ll kiss him and then bye guys! Hahaha! ‘Good night!’ and then I left and walked away.”

The actor was quick to add that it was no longer the case “when we had our first, first kiss, I know.”

“Bumawi naman because he laughed at me for kissing him like that,” said Ellen, looking back, “Bakit nga ganun ba first kiss namin, memorable!”

The two also recalled their actual first meeting and it wasn’t the famous dinner, from which “walang malisya” photos were shared and spread online.

Derek said that neighbors and common friends were already trying to introduce them long before actually he met Ellen, who lives two blocks away from his house in Ayala Alabang.

“They’re the ones who are really pushing us together. Ellen and I were trying to no, no, no, it can’t happen. And then it just happened.”

The formal introduction took place sometime early January, thanks to John Estrada — Ellen’s co-star in the TV5 sitcom John En Ellen and Derek’s golf mate and close friend. John asked Derek to come and meet Ellen at a hotel to which he said no at first.

But even if Derek was reluctant, Ellen said that “Derek has been stalking me since December. He messaged me on Instagram, he was like ‘Hey neighbor.’ He saw me walking or jogging…

“She was dancing in front of my house! It was like five meters away from my house. You were dancing on the car,” Derek explained, referring to Ellen’s morning walks with her son.

“When she walked in, I think she was coming from the bathroom. You were also a little bit tipsy na. And she just stopped and looked at me like that… She had that look like she was going to stab me or what,” he joked.

They had a good evening, Derek recalled, and he drove her home that night with his nephew and niece, and a few days later, hosted that famous dinner get-together at his home.

“That’s where it all started,” Derek said.